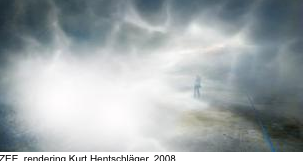 Entering ZEE, the visitor is immediately absorbed in a vortex of dense, odorless fog that completely obscures the walls, floor and ceiling. Individuals freely roam this environment with the help of ropes, while flickering light filters through the haze, inducing spatial disorientation and visual “distortions”.. All the usual cues that contribute to depth perception—texture, shadow, size, perspective—are erased, returning each spectator, as it were, to a state of “tabula rasa”, where one’s perceptual framework is reset and then recalibrated. A droning soundscape creates an almost tactile aural field, intensifying the experience and shifting dynamically according to changes in the color, light and frequency.

ZEE succeeds without a narrative or reproducible imagery, since what is seen is not captured through the eyes, but rather first produced in the brain. As James Turrell has said, “Objectivity is gained by being once removed. As you plumb a space with vision, it is possible to 'see yourself see'. This seeing, this plumbing, imbues space with consciousness."

"The question of how, and what we perceive as the world, around and within us—what is real, a dream or illusion—continually occupies me,” stated Hentschläger. “When the fabric of our minds is manipulated, whether through psychedelic drugs or other sources that confuse the synapses firings, such as the strobe lights in ZEE, this "enlightening" reveals the malleability of our minds and consciousness. The question of what originates from within us, and what are reflections of the world around us, is the basis of my work.”

For over a decade, Kurt Hentschläger has been exploring ways of enhancing and intensifying perception. Wishing to expand beyond the two-dimensionality of video and film projection, and the limitations of adapting to a given architectural space, Hentschläger has constructed his own alternative worlds through live performance, installations, multi-screen projections, and recently through environments that disorient through stroboscopic lighting and shifting color fields, intense soundscapes and sub-bass. From the large-scale audio-visual events produced as part of the Austrian duo Granular-Synthesis, to collaborations with French choreographer Angelin Preljocaj and vocalist Diamanda Galas, to his solo immersive installations, Hentschläger finds ways of collapsing the gap between viewer and work, image and reality, inside and outside. Offering a compelling contemporary version of the aesthetic of the sublime, Hentschläger’s work insists that we not merely “watch” and “listen” to images and sounds at a safe distance, but that they penetrate, confront, and overwhelm us by their sense of limitless power and complexity.

“Artist Kurt Hentschläger makes immersive experiences that disorient and even overpower the senses, taking daring art lovers to new places of perception. Pushing through discomfort and lack of control, not an easy task for New Yorkers, one is rewarded with new sensations and a mind expansion that actually allows one to create new images. It is so exciting to have the artist back in NY from Europe after his breakout Noisegate debut with Gran-Synthesis at Creative Time's Art in the Anchorage in 2000," stated Anne Pasternak, Director, Creative Time.

This is ZEE’s New York premiere. The project was originally co-commissioned by OK-Center Linz, and Wood Street Galleries, Pittsburgh, in 2008.

Chicago-based Austrian artist Kurt Hentschläger creates audio-visual compositions that lie somewhere in between performance and installation. The immersive nature of his work reflects on the metaphor of the sublime. Trained as a fine artist, in 1983 he began as a sculptor by building surreal machine objects, followed by works with video, computer animation and sound. Between 1992 and 2003 he worked collaboratively as part of the duo Granular-Synthesis. His most recent solo work is more poetic and further researches the nature of human perception and accelerated impact of new technologies on individual consciousness.

ZEE is the inaugural event of FuturePerfect, a new citywide performance, media & technology initiative. Its mission is to research and present hybrid performance practices, media forms, and artistic ideas that continue to emerge as computer technologies and electronic networks mature and become inseparable from contemporary culture. In particular focus is the future of live performance and related visual culture. Wayne Ashley is the founding director and organizer of FuturePerfect 2011, a performance festival and exhibition, is slated for New York City during Spring 2011. He was formerly the Director of Arts in Multimedia at Brooklyn Academy of Music, BAM. http://www.futureperfectfestival.org Contact: wayne@wayneashley.net

PANEL DISCUSSION in conjunction with ZEE

More than any other concept, “immersion” has become one of the most taken-for-granted expressions in writings on technology, and increasingly used to describe a vast array of different media, creative processes, and ways of audience engagement. From video games and 3D cinema, to new counterinsurgency strategies for simulating theaters of war; from realistic touch feedback medical training systems, to the aesthetics of site specific performance and installation. They all share the same desired effect: collapsing the gap between viewer and work, image and reality, inside and outside. Five distinguished panelists will show and discuss their work in relationship to these and others issues.

Performance Space 122 has been a hub for contemporary performance and an active member of the East Village, as well as the wider cultural community in NYC and across the globe for the past 30 years. In just the past 4 years, under the curatorial vision of Artistic Director Vallejo Gantner, P.S.122 has opened the curtain for more than 2,100 performances, welcomed more than 100,000 visitors, and supported the work of more than 1,800 artists, performers, choreographers, playwrights, directors and designers. P.S.122 is dedicated to supporting and presenting artists whose work explores innovative form and content and challenges the traditional boundaries of dance, theatre, music, and performance, and continues its steadfast search for pioneering artists from a diversity of cultures, nations and beliefs.

3LD Art & Technology Center is a non-profit theater and media group focusing on large-scale experimental artwork. Their work has been seen in New York City at such venues as the Kitchen, La Mama, The Ontological-Hysteric Theater, PS 122, and Signature Theatre Co. Since 1994, they have become a mainstay in the experimental arts community and have been performing downtown ever since. 3-Legged Dog (ELD) is the first producing arts group to sign a lease in the Liberty Zone and the first to rebuild downtown. A cultural anchor for the Greenwich Street Arts Corridor, the new center provides complete production and presentation facilities for emerging and established artists and organizations that create large-scale experimental works, many of which incorporate and create new tools and technologies.