The Kitchen (NYC) presents the exhibition The View from a Volcano: The Kitchen’s Soho Years, 1971-85 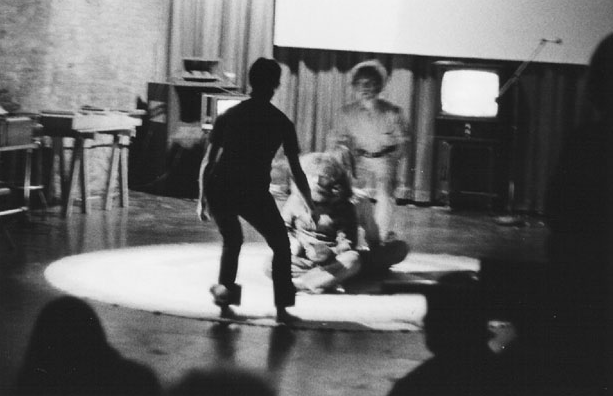 Photo Archive
June 30—August 27
New York, NY, May 23, 2011—The Kitchen presents The View from a Volcano: The Kitchen’s Soho Years, 1971-85, an exhibition featuring single-channel videos and other artworks presented alongside video, audio, and print documentation related to the institution’s programming during its first fifteen years, which were spent in Soho.
There will be an opening reception for The View from a Volcano at The Kitchen (512 West 19th Street) on Wednesday, June 29, 6:00–8:00 P.M. The exhibition will be on view Thursday, June 30 through Saturday, August 27. The Kitchen’s gallery hours are Tuesday—Friday, 12:00 P.M. to 6:00 P.M. and Saturday, 11:00 A.M. to 6:00 P.M. Admission is free.
Curated by Debra Singer, Matthew Lyons, and Lumi Tan as part of The Kitchen’s 40th anniversary season, The View from a Volcano reveals the depth of the organization’s early history as a home for both experimental performance-based work and new developments in the visual arts, offering a unique perspective on the vibrant, interconnected downtown New York arts scene of the 1970s and early 1980s.
The exhibition will include work, and/or documentation of work, by ground-breaking artists who were redefining what art, music, dance, and performance could be. Those artists include Vito Acconci, Laurie Anderson, Karole Armitage, Robert Ashley, Charles Atlas, Beastie Boys, Dara Birnbaum, Eric Bogosian, Trisha Brown, Rhys Chatham, Lucinda Childs, Tony Conrad, Simone Forti, Philip Glass, Gary Hill, Joan Jonas, Bill T. Jones, Mike Kelley, George Lewis, Arto Lindsay, Robert Longo, Christian Marclay, John Miller, Meredith Monk, Matt Mullican, Tony Oursler, Charlemagne Palestine, Arthur Russell, Carolee Schneeman, Cindy Sherman, Stuart Sherman, Sonic Youth, Elizabeth Streb, Talking Heads, Woody and Steina Vasulka, Lawrence Weiner and many more.