Leonard has a skin! (And it's green and furry)

In our latest days of Leonard construction, we have ventured away from Chapter 1: the foam and, moved toward Chapter 2: the fabric. These two chapters in The Making of Leonard had a bit of an overlap as you can see in the below pictures. 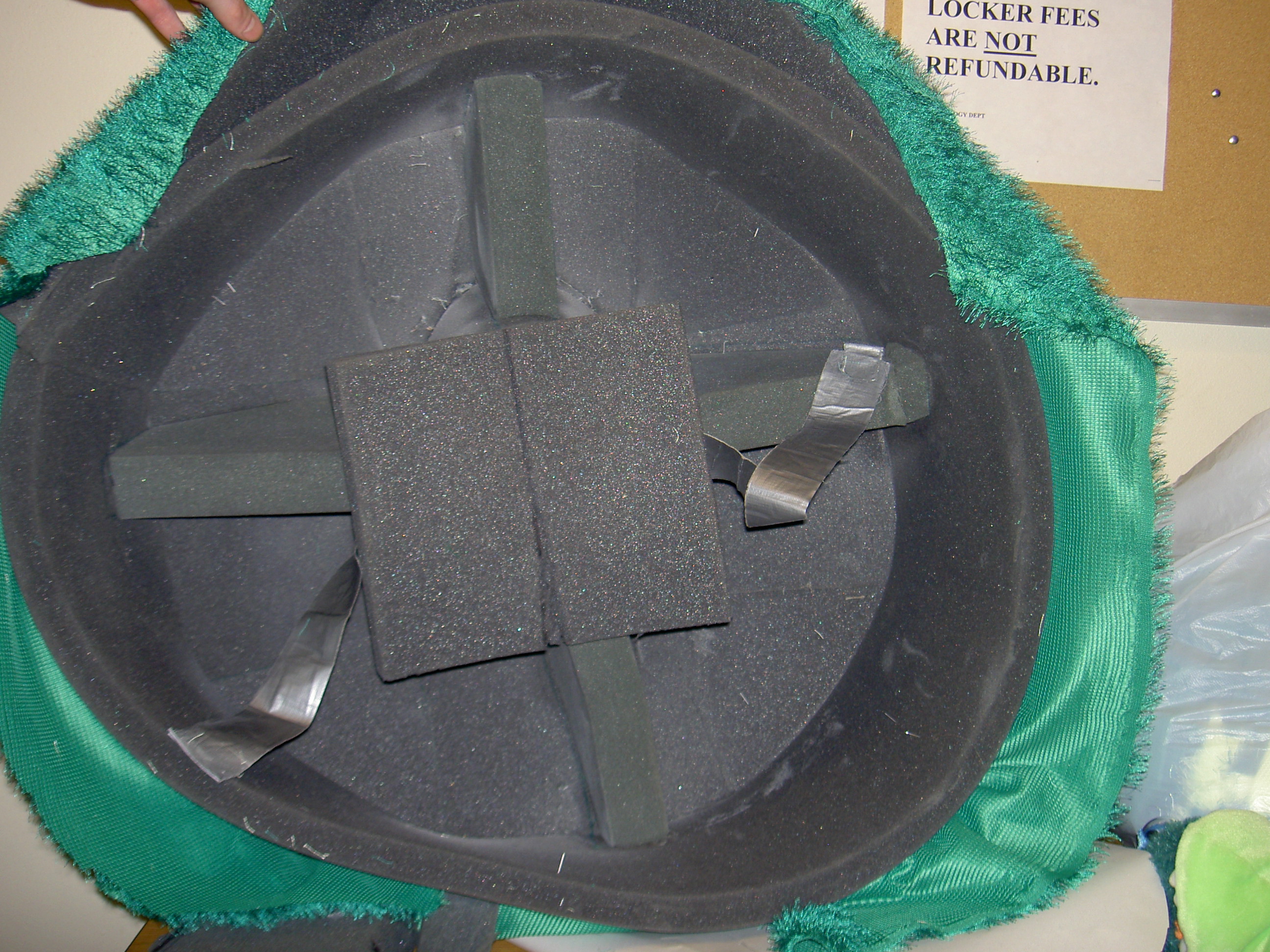 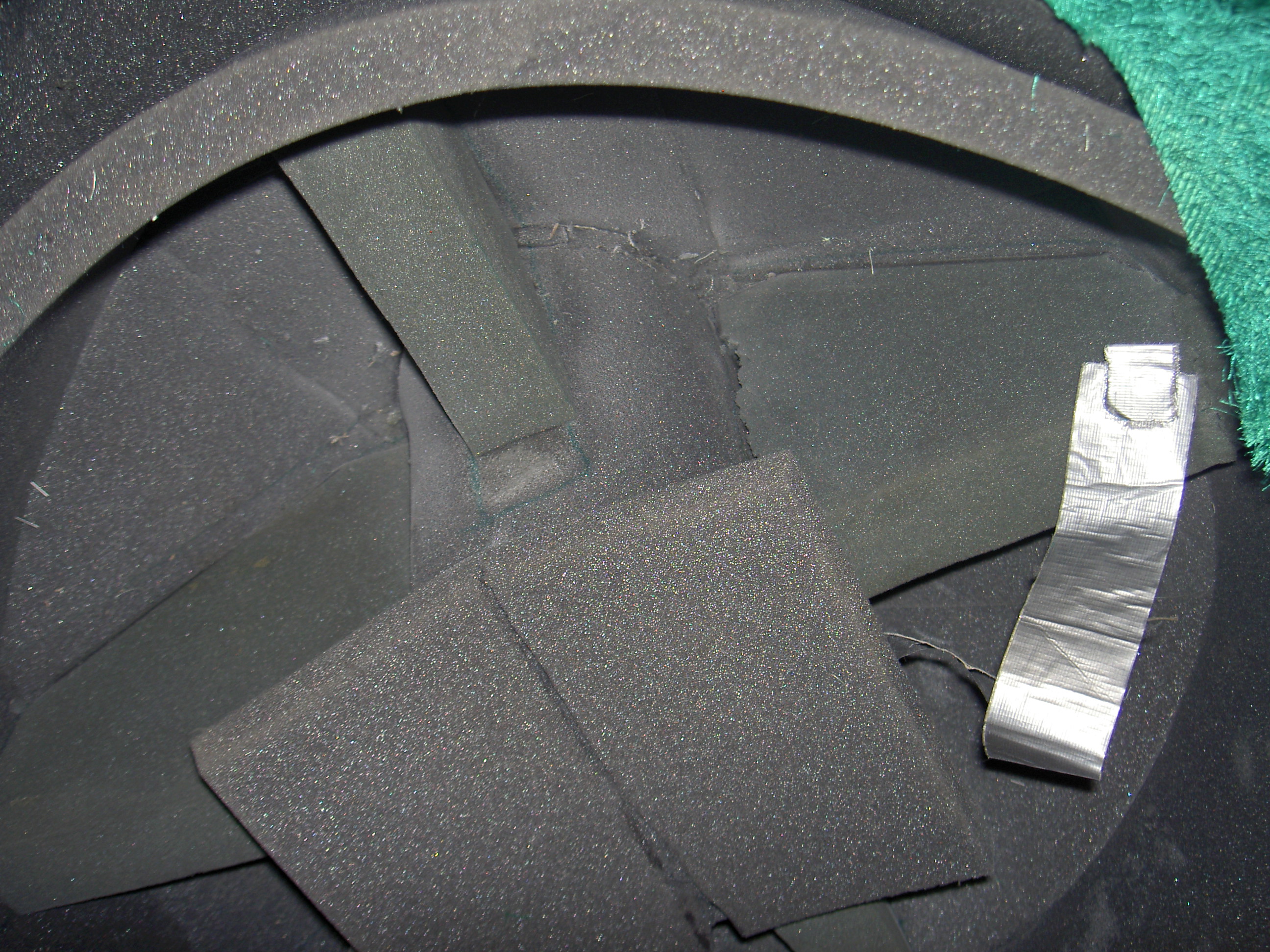 As these pictures show, we added the center piece to the dome that Shawn will secure to the top of his head. The four triangle-like shapes surrounding the center piece keep it and the dome structure supported. It's pretty sturdy if I do say so myself. 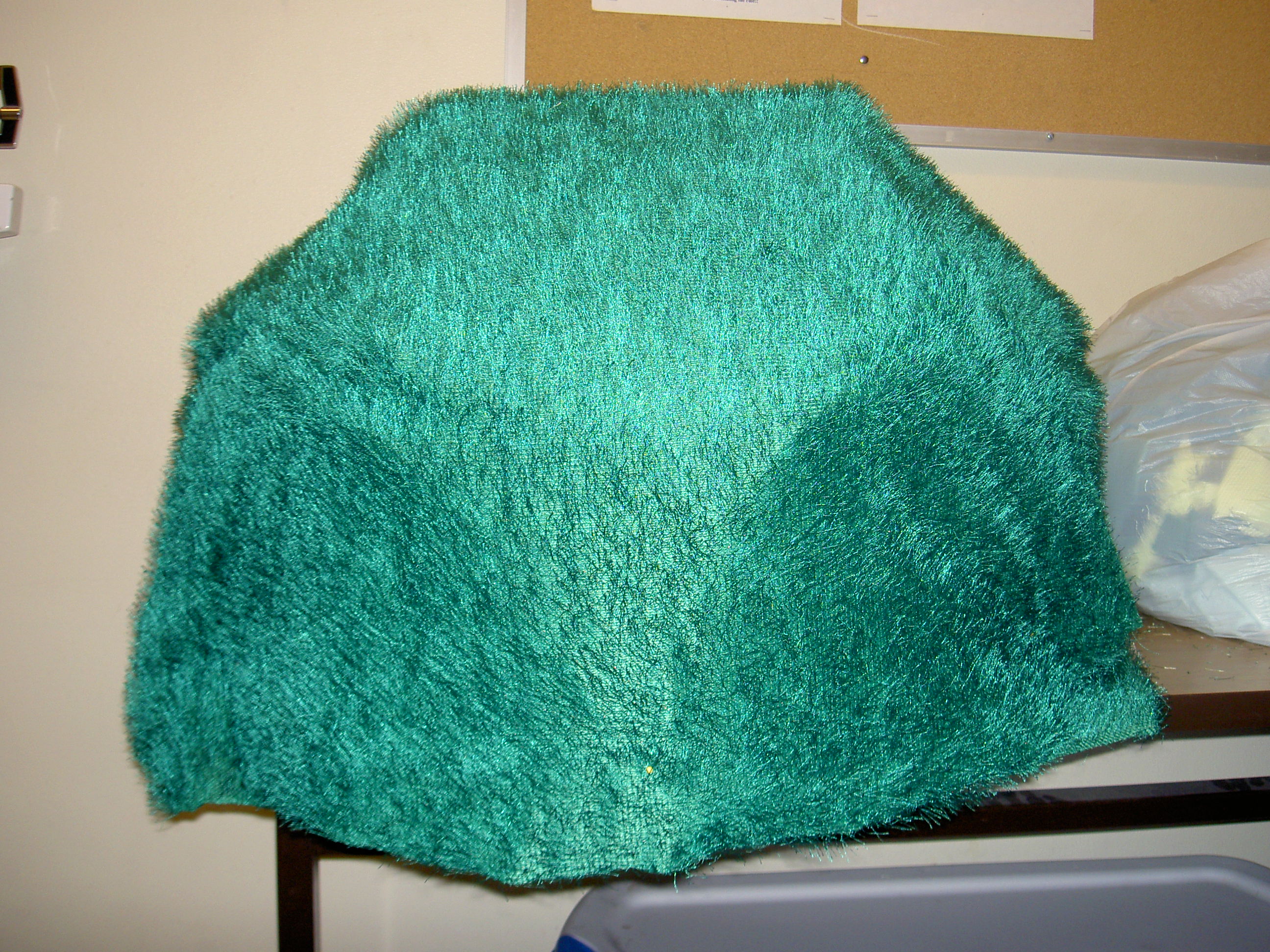 Top of Leonard's head (aka the dome) 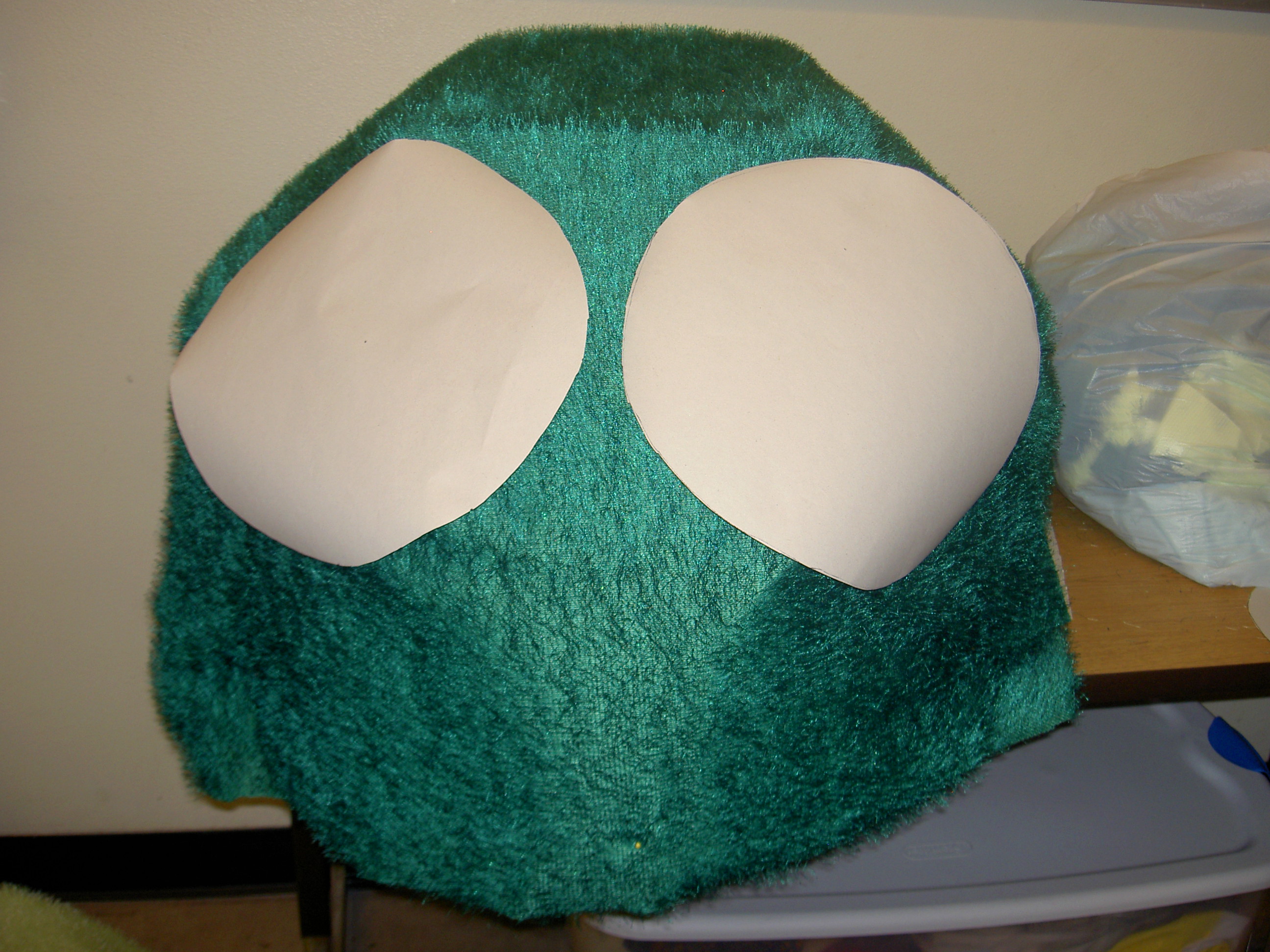 Leonard's head with paper cutouts set where his eyes will be (They will be giant plastic googly eyes - and yes, these paper cutouts are the actual size, ha ha ha.) 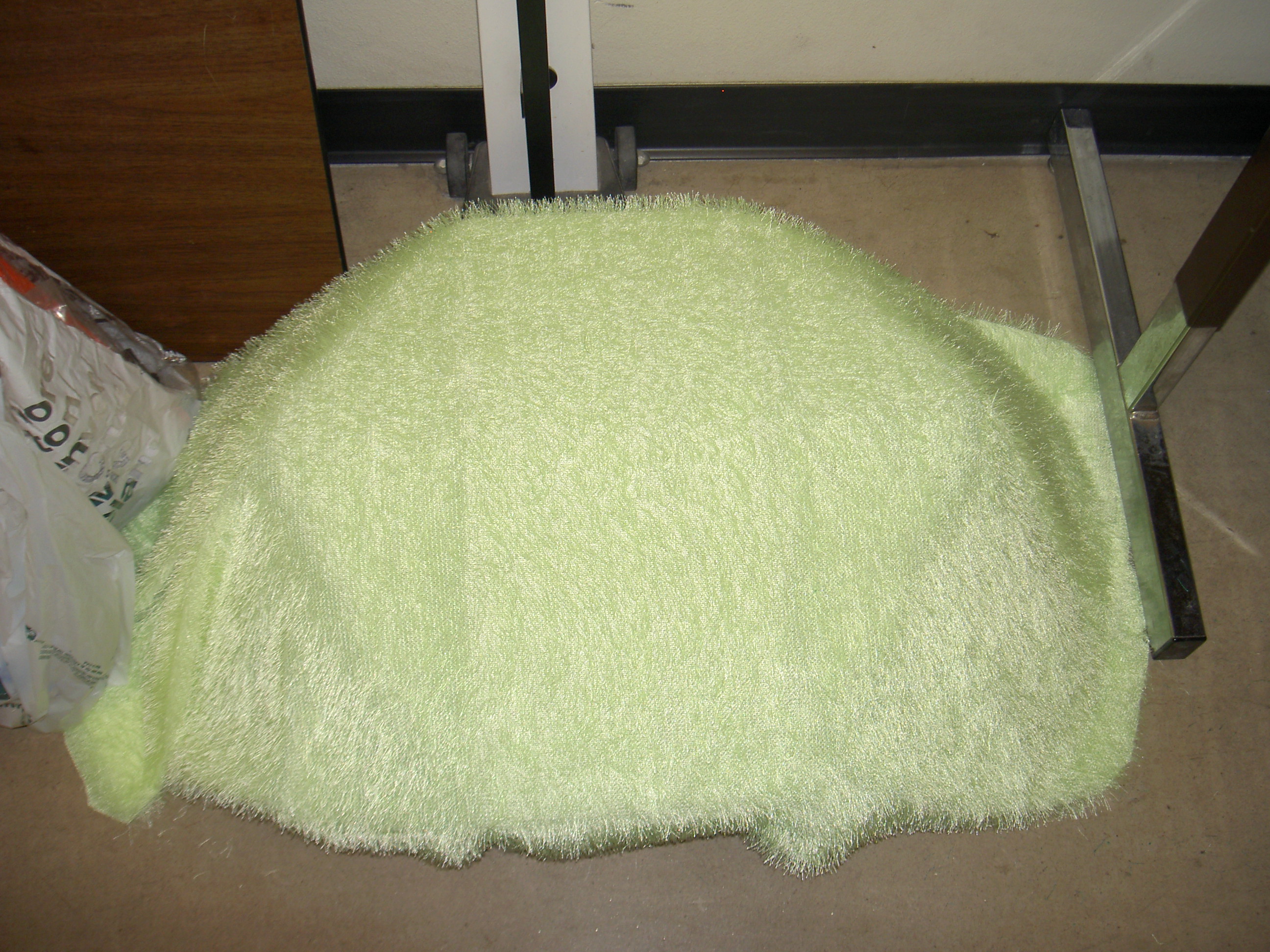 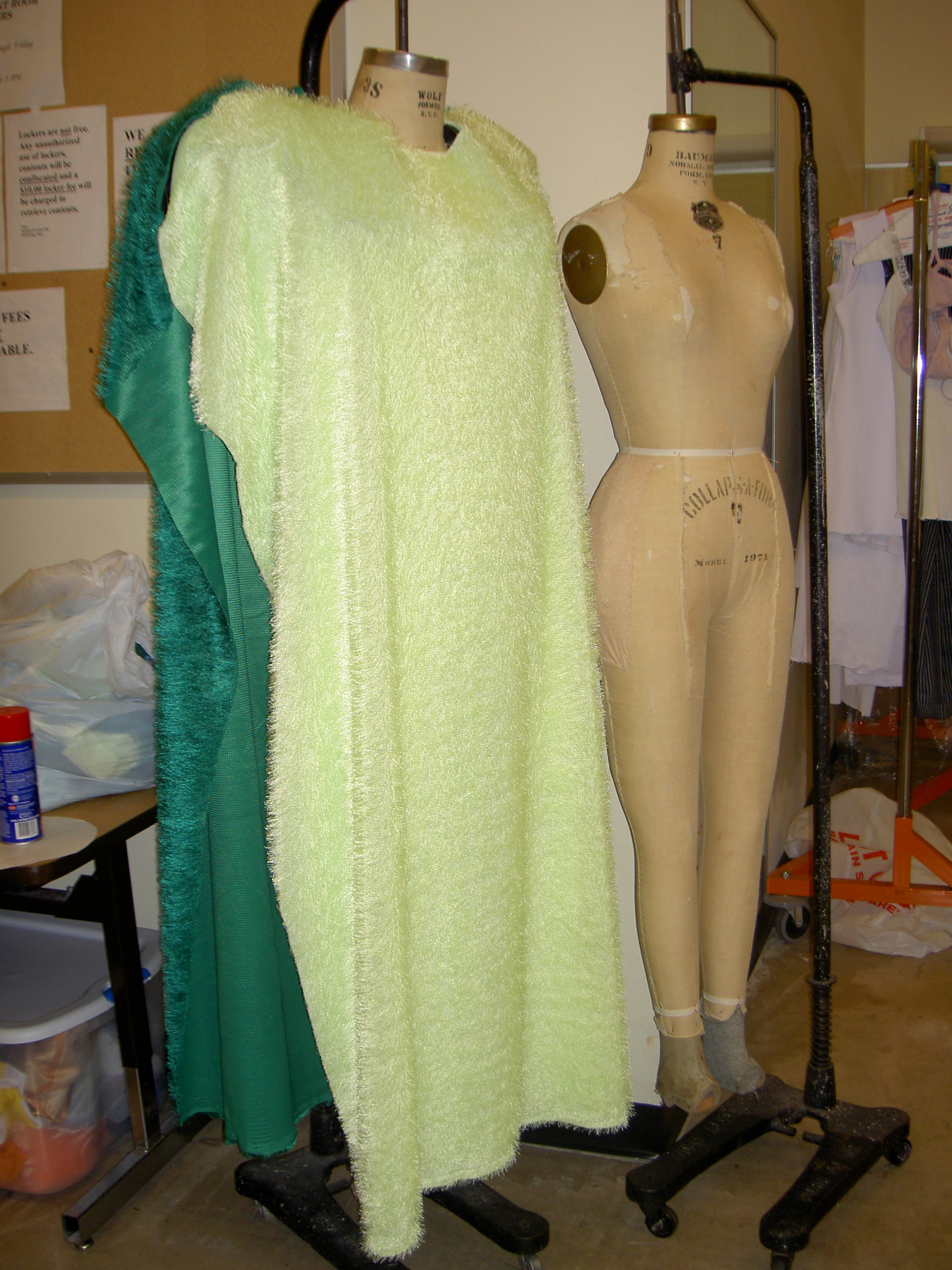 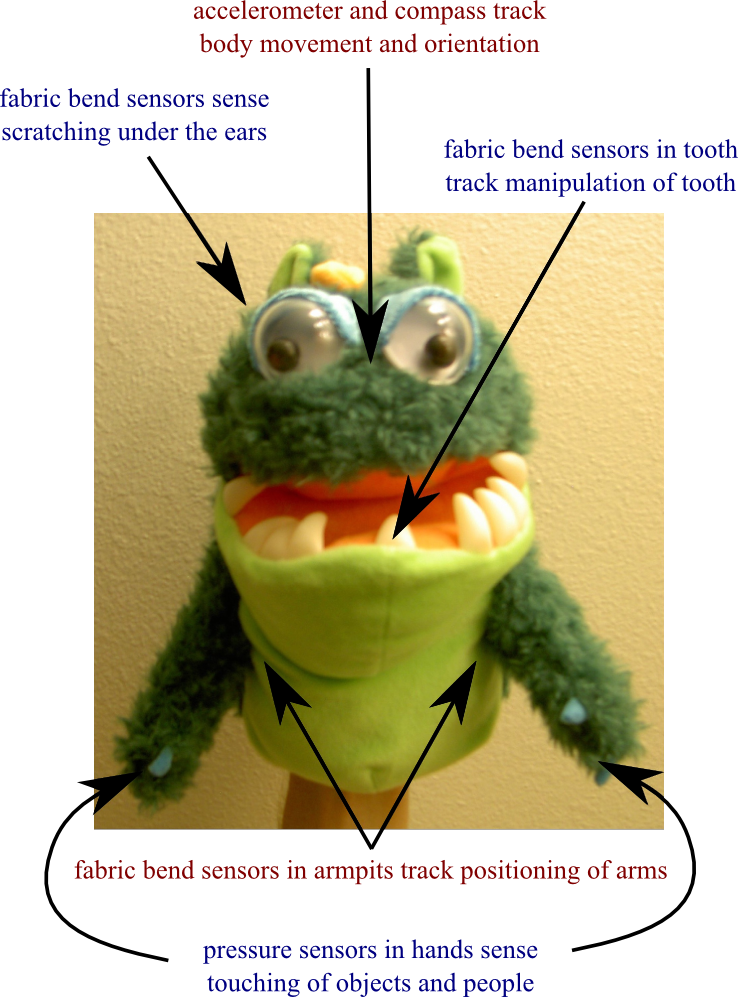 A reminder of what the small Leonard puppet looks like

I have been working side by side with a wonderful and amazingly talented couture fashion and costume designer, Galina Mihaleva. As you can see, we have set the fabric where we want it, but we are waiting to secure the fabric until we have all of the parts with sensors built and added to the costume (ears, teeth, etc). We just finished the ears and added the sensors, as you can see here. 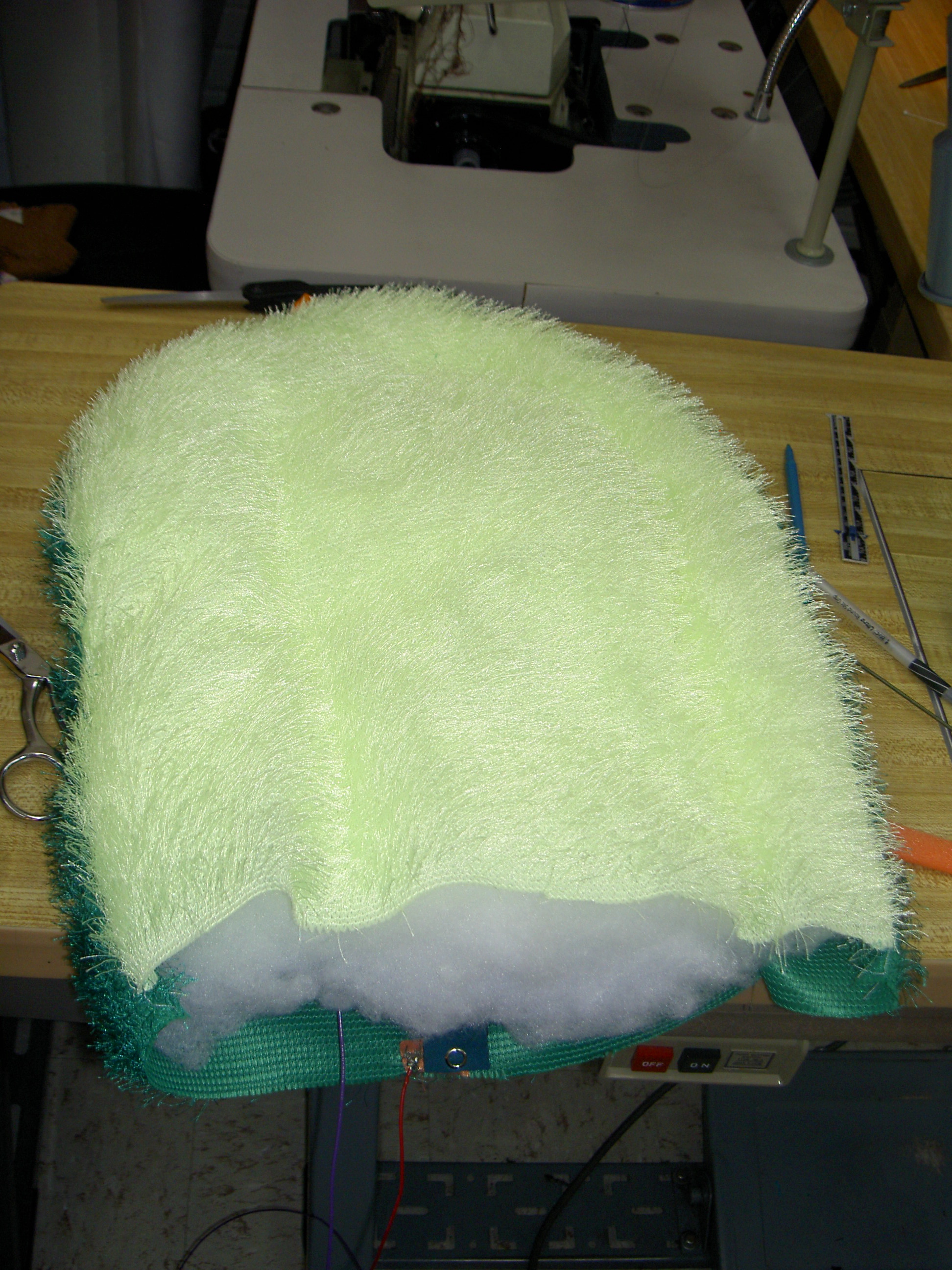 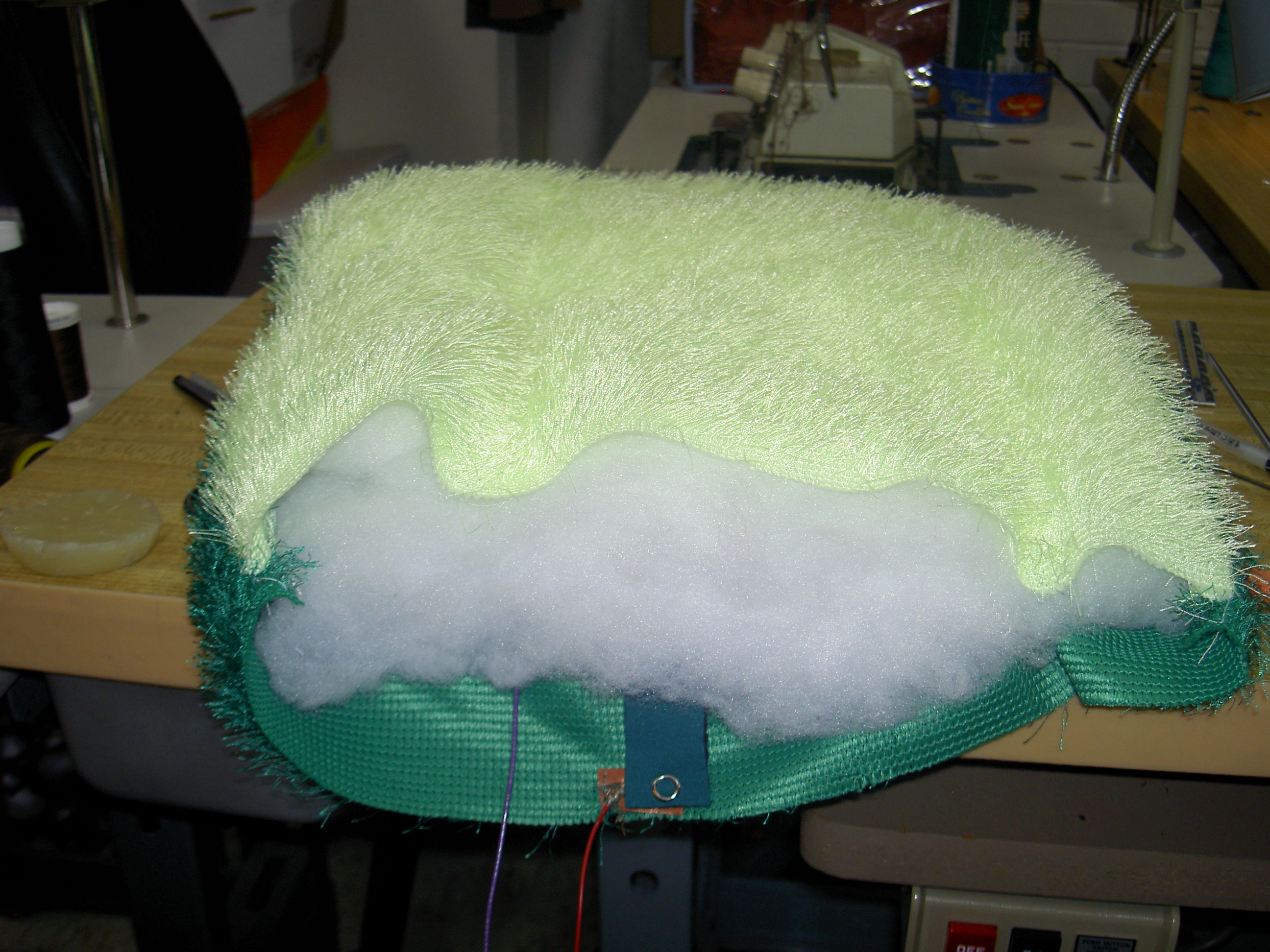 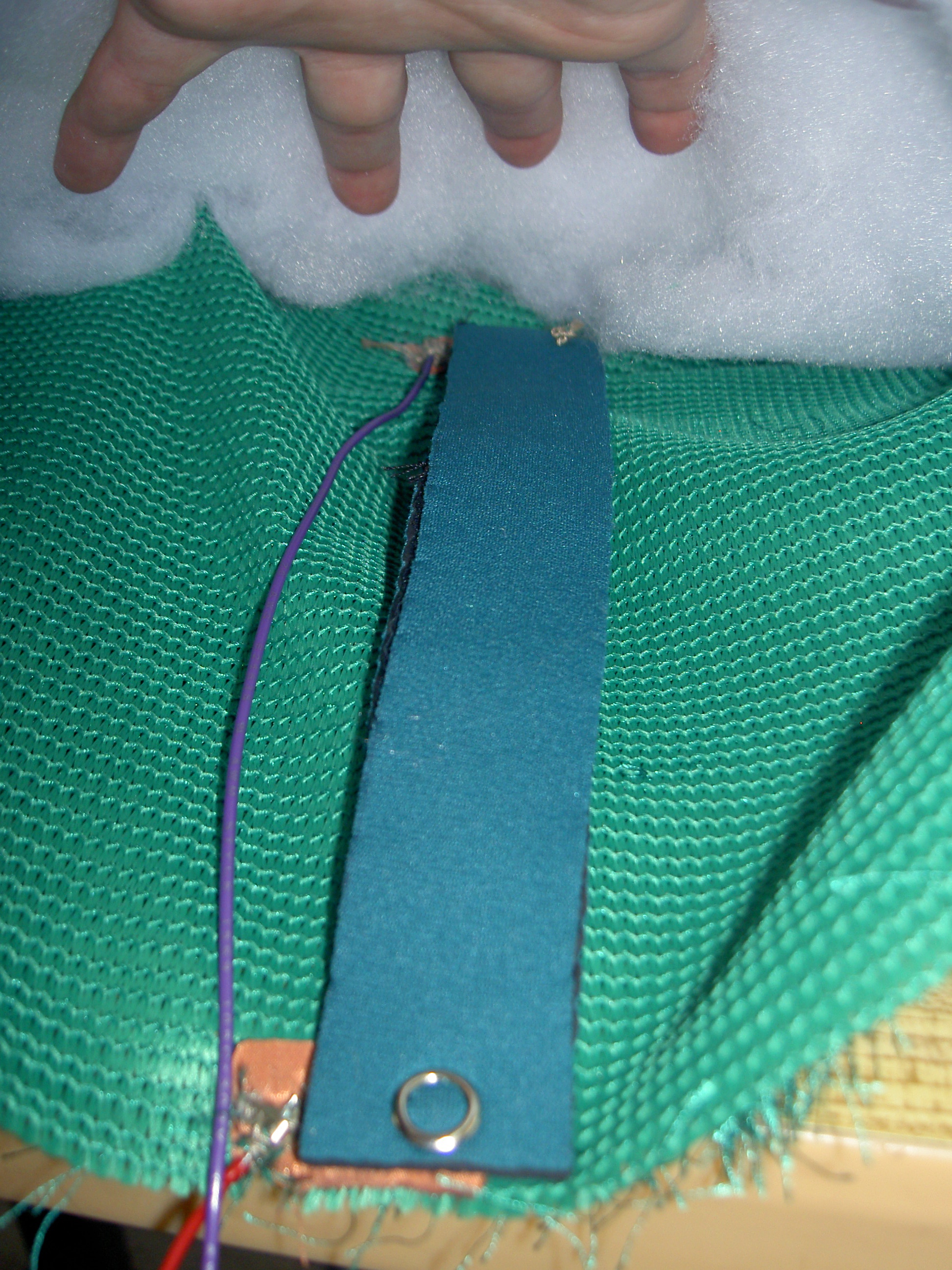 These fabric bend sensors are here so that when people scratch Leonard behind the ears or play with his ears, he will make sounds. We plan to cut slits into the foam, stuff the bottoms of the ears through the slits, and glue it down with the same adhesive glue used for the dome. The bottom half of the ear sensors will be sandwiched in the foam, and the top half will be in the exposed part of the ear... 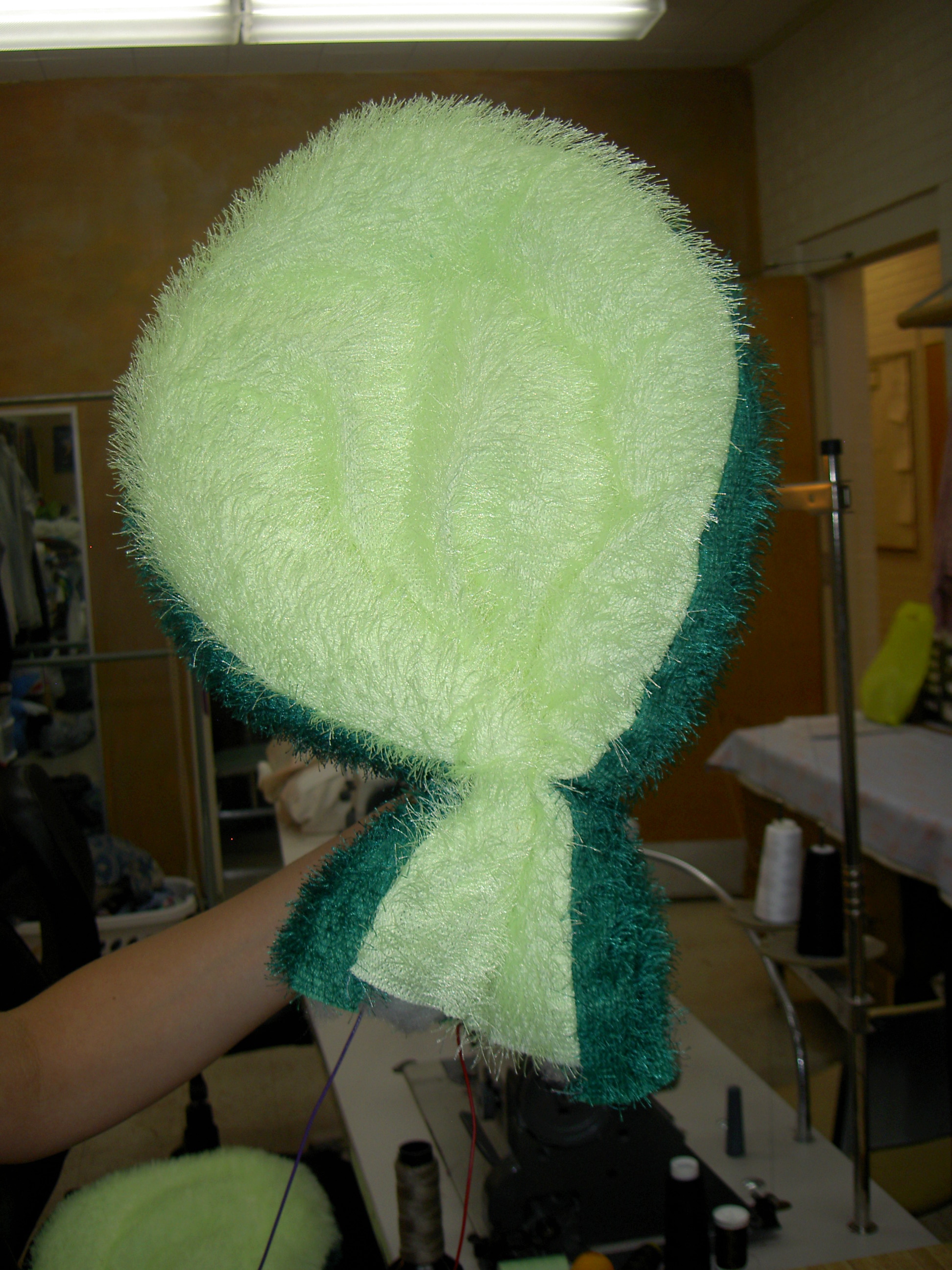 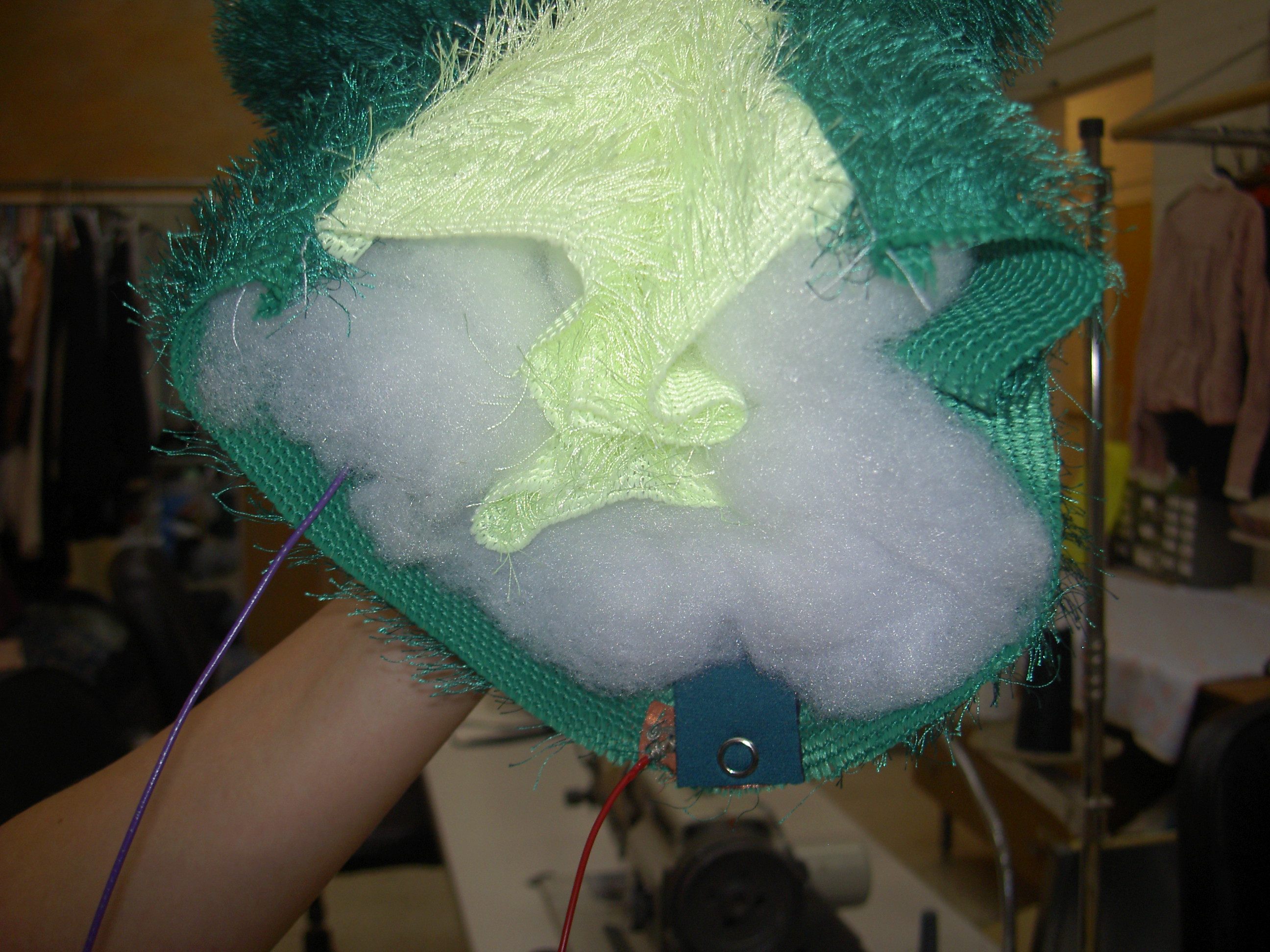 We will use a similar design for the teeth, which will also have sensors.

We originally planned to use the conductive thread/fabric to transfer the sensor signal down to the Miditron Wireless transmitter (this would mean less wire). However, because we have several sensors connected to different detachable pieces of the costume (the dome head, jaw, and body) we are now planning to simply use wire. As you can see in the pictures below, I soldered crimp tubes (usually used in jewelry making) to the ends of the wires. I am using these hollow, metal tubes to sew the wire onto the conductive fabric connected to the sensor. I used the conductive thread to sew on the wires. The wires will be strung down to the Miditron Wireless transmitter, which will be secured to the back of the football shoulder pads in a mini pouch. 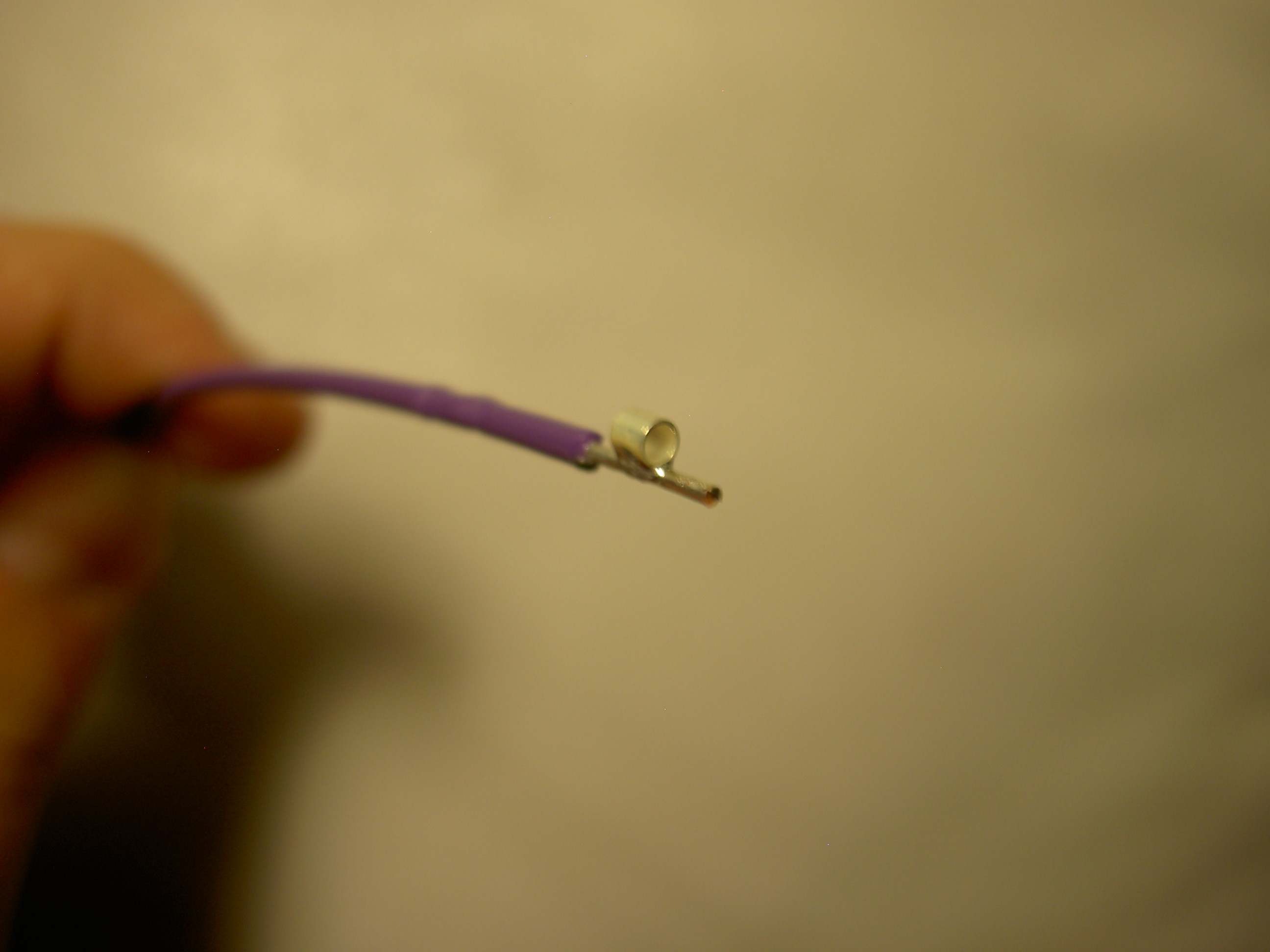 Bend Sensor before its sewn and trimmed. I found that when I sew with the conductive thread, it tends to fray a lot. I use a small pair of scissors to trim away the frayed pieces of thread that you can see here. 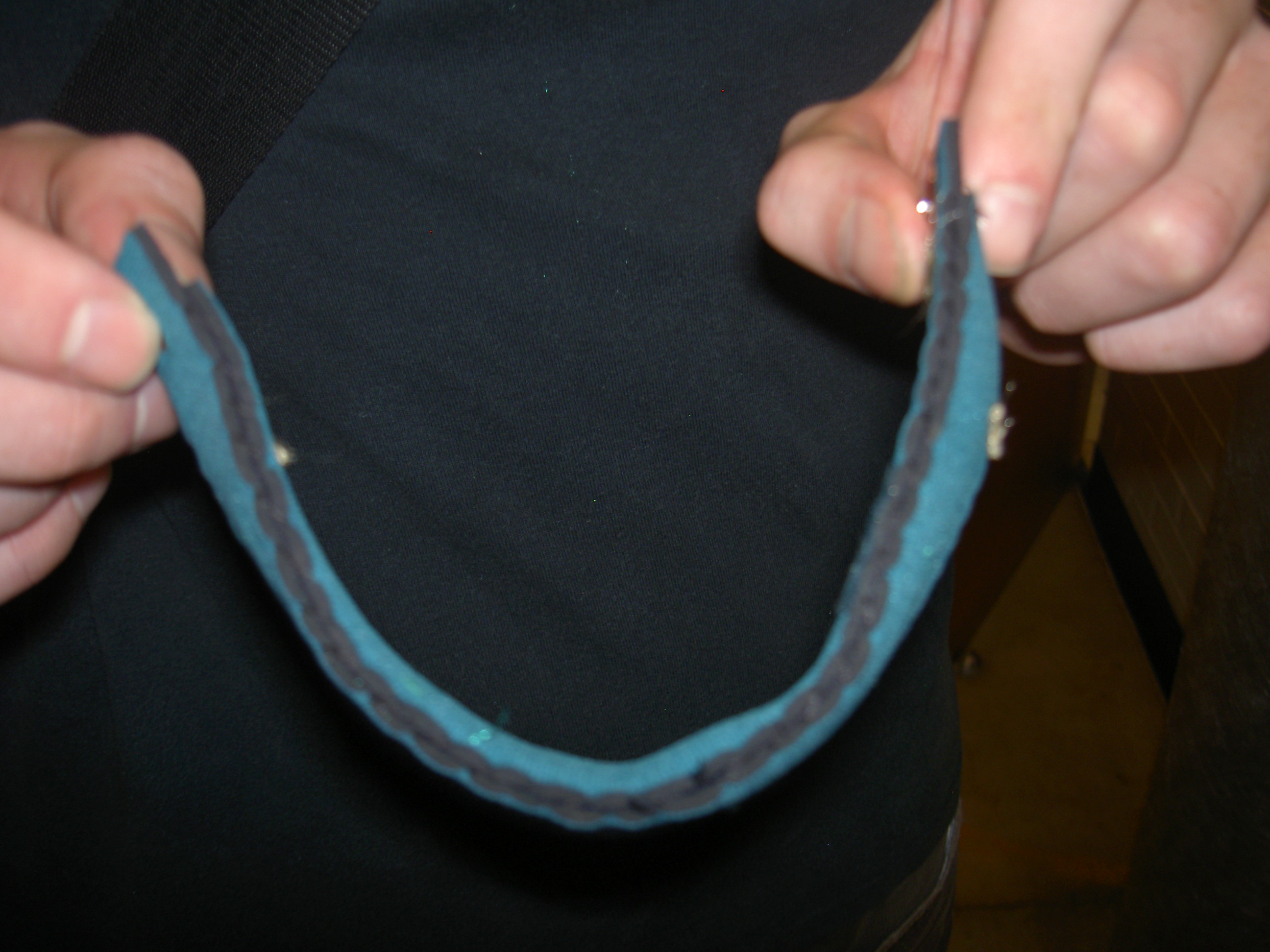 I suppose that is good for now. Just to give you an idea of what is coming up. We will be making GIANT googly eyes out of 12" diameter clear domes, which you can see here. They should be coming in the mail within the next couple of days. We will either use painted foam balls or rubber balls to make the bouncy part of the eye inside of the clear domes. (Lots of domes in this project.)

We will also be making the teeth with sensors, securing the fabric, and sewing the body of the costume. Heck, the next time you hear from me, the costume might be pretty darn close to done! (Well, then comes the programming part - ha!.....done.....Shya)