If you are representing an organization, what is the name of the organization:
AwakeningArt workshops

First Name (Required: even if you are representing an organization you must use your name)
Diane

About Me (human/individual)/interests, work..short bio/ THis is the most important. It is the only way to know that you are not a SPAMBOT!Be generous!
DIANE BUTLER, Ph.D., is a movement artist, teacher and cultural program director who has collaborated with artists from diverse cultures and faiths in the Americas, Europe and Asia for over 25 years and resided in the villages of Bedulu and Tejakula, Bali since 2001. She has been developing and leading AWAKENINGART workshops since 1997 and holds an annual series in the villages of Bedulu and Tejakula, Bali, Indonesia and as a guest teacher in other countries. Her current workshop schedule in Bali and abroad is available at: awakeningartworkshops.wordpress.com

which other:
Movement Artist and Program Director

Diane Butler, Ph.D., is a movement artist, teacher and cultural program director who has collaborated with artists from diverse cultures and faiths in the Americas, Europe and Asia for 25 years and resided in the villages of Bedulu and Tejakula, Bali since 2001. In 2014, she was appointed as a volunteer Associate Professor in the Cultural Studies Doctoral Program at Universitas Udayana, Bali. Born in Ohio, she lived in New York City in the 1980s – assisting and performing in site-specific works by Sino-Japanese American choreographer Ruby Shang with American, Asian and European artists in natural and urban sites and festivals in the US, France, Japan and UK. Since receiving Mahayana Buddhist vows in 1986, she has engaged in daily shamatha-vipassana meditation, solitary and group retreats, dharma studies, lay practices and meditation instructor training, while applying her practice in the arts. Diane contributed to the field of contemplative education as an Associate Professor, Founding Chair of InterArts Studies and Director of Dance/Movement Studies at Naropa University in Colorado (1990–2001) and Assistant Director (2000) and Director (2001) of the Naropa Study Abroad program in Bali. She was a Co-Founder of the Mariposa Collective (1994–2001). Diane has taught movement and creative process workshops for the Lincoln Center Institute, George Mason University, Hofstra University and Colorado Dance Festival, USA; Tanssavintti in Helsinki, Tanztendenz Munich, Moving Arts Köln, LaSalle Singapore Institute for the Arts, Universitas Tarumanagara Architecture Department in Jakarta, and the Dance and Faculty of Built Environment departments at University of Malaya in Kuala Lumpur. She was a presenter for the 3rd Sharing Time: Nature Movement Art in Dartmoor, UK (1997), 4th European Transpersonal Association Conference: Mandala of Chaos & Harmony in Warsaw (1997), 4th Parliament of the World’s Religions in Melbourne (2009), the 26th Annual Body-Mind Centering® Association Conference: Exploring Our Somatic Roots held in North Carolina (2011), and the 1st Indonesia Spirit Festival  at the Yoga Barn in Ubud, Bali, Indonesia (2012).

She has been developing and leading Awakening Art workshops since 1997 – initially in rural and urban areas of the Czech Republic, Poland, Vienna, Hamburg, New York and California and since 2001 in an annual series in the villages of Bedulu and Tejakula, Bali, Indonesia and as a guest teacher in other countries.

Dr. Butler holds a BFA in Dance from The Juilliard School, an MALS in Dance and Culture from Wesleyan University, and was noted as the first foreign scholar to earn a Ph.D. in Cultural Studies from Udayana University, Bali, Indonesia in January 2011. She is an alumni of the 2011 Session of the United Nations Institute for Training and Research (UNITAR) series on the Management and Conservation of World Heritage Sites.

She has practiced and collaborated in ritual arts with Javanese movement artist Suprapto Suryodarmo since 1997 and is a Dialoguer in Amerta Movement. In August 2001, Diane and Prapto initiated International Foundation for Dharma Nature Time to support interculture in cultural environments through sharing in the arts, religiosity, and nature. As the President, she has been involved in the actualization of inter-village, inter-province, international intercultural events in sites in Bali and Java with hundreds of artists, scholars and interreligious leaders.

Her chapter "Awakening Art and Dharma Nature Time: participatory approaches to interculture in cultural environments" is in the book Embodied Lives: Reflections on the Influence of Suprapto Suryodarmo and Amerta Movement edited by Katya Bloom, Margit Galanter, and Sandra Reeve and published in 2014 by Triarchy Press, UK. 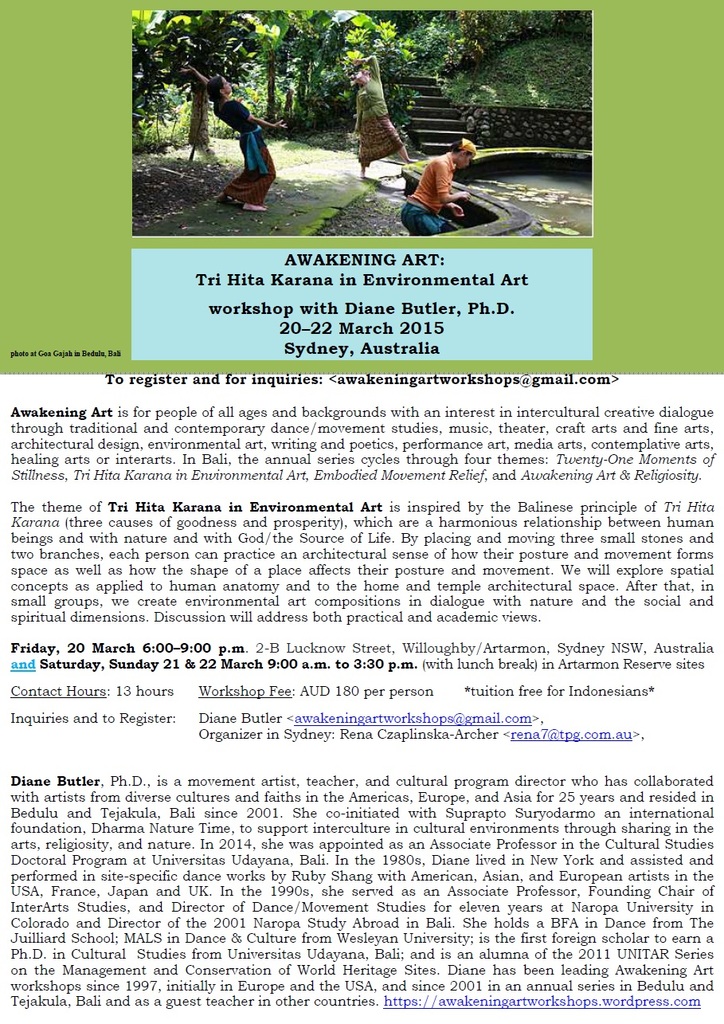 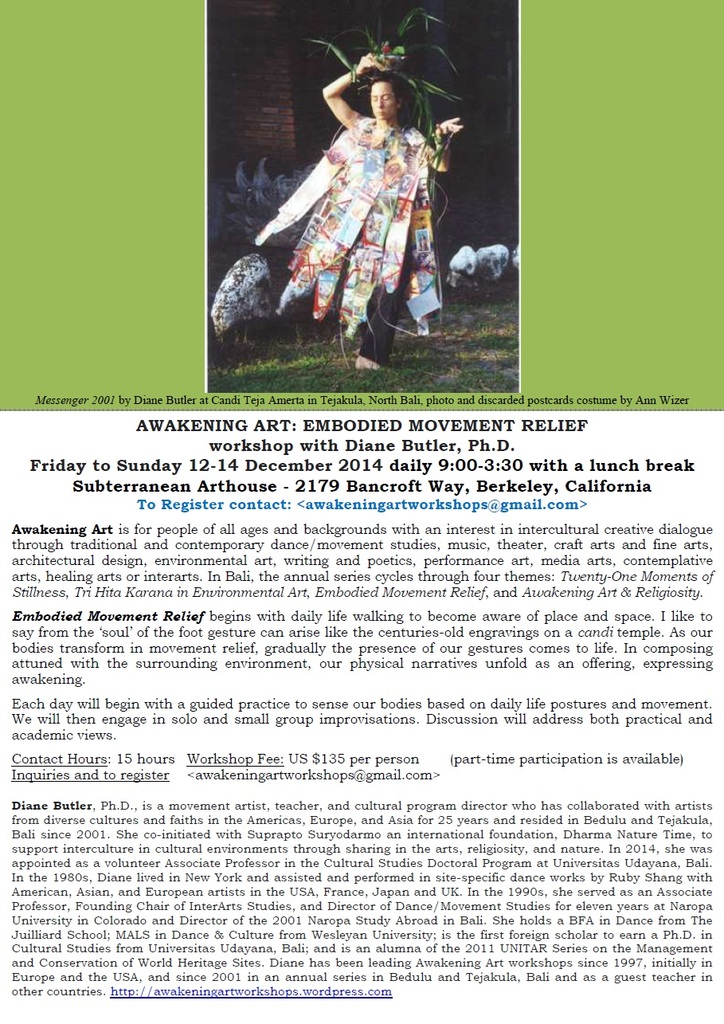