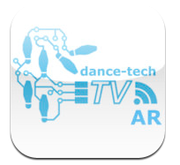 The dance-tech AUGMENTED REALITY creative residency gives opportunity to movement and media artists to develop and launch projects exploring the potential of the AR space for art making.

This group is only for communication and harvesting the experience  of resident artists.

More on the AR residency 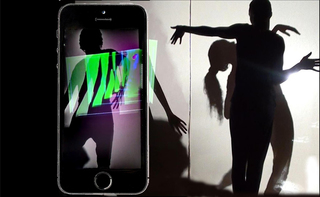 This month we welcome Jeannette Ginslov a Danish/South African dance on film specialist, for screen, AR and the internet. For 6 weeks Ginslov's research and practice will explore the notion of: P(AR)ticipate: a body of experience/a body of work. Ginslov will research the connections between her past and present, the 'real' and the remembered, the virtual and the archived and how it may be accessed by screendance, the internet and the augmented reality app Aurasma. The research will culminate in a live solo performance that asks the viewer to participate with their smart mobile devices to uncover the layers of archived video material, personal stories and political memory. In addition the viewer will experience empathic responses in the exploration of these narratives, and at the same time reveal the instability of personal memory, its state of flux and temporality. Ginslov's research asks and tests how memory is stored in the body and how it may be retrieved by new media tools and audience engagement.

The performance, 30 August, invites the audience to P(AR)ticipate virtually in Ginslov's personal memories of living in an Apartheid South Africa, as the "other-other", as well as documentary footage of her 25 year dance archive, that spanned pre and post Apartheid, by using the AR app Aurasma on smart mobile devices. The app is triggered by markers tagged on Ginslov's slow moving body and as the viewer scans the device very close to the markers, a video will be triggered. Both performer and viewer will pause briefly as the video plays. There could up to 5 viewers doing so at once thereby coercing the viewers empathetically to become part of the choreography and performance of memory, presence and porous materialities.

In this way the work is a dialogue, a contact mediation, meditation, and improvisation, where both dancer and viewer are aware of the virtual internet connection point and its ephemerality. The work emphasizes time, history, real, virtual and digital materiality as well as memory that is contained in certain parts of the body. It is immersive and disrupts usual performance-audience dynamics. The AR is used to uncover tacit memories stored in the body and so the the performative work becomes a "visceral seepage", oozing from the dancer's body and rendered into haptic, empathic and visceral connections between dancer and viewer. It explores moments of tension and release, contraction and expansion, connection and disconnection, past and presence through and with bodies and the internet. 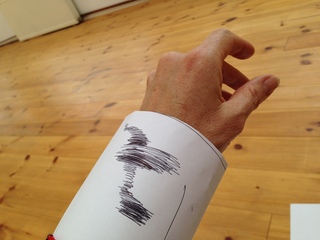 Ginslov will also run three workshops leading up to this performance:

Dance and Choreography for Camera/Dance with for by Camera

Workshop Requirements: Small video handy-cam or phone with a camera and a laptop with editing software if possible.

For the Performance and Workshop you will need to download Aurasma onto your Android or Apple device from the App Store. Once downloaded you can search for the P(AR)ticipate Channel and follow it. For more details see Aurasma: http://www.aurasma.com/ . You will be assisted at the performance in doing this and will be able to use an iOS device if you do not have one.

Visit Jeannette Ginslov's Website for more details about P(AR)ticipate and her portfolio of work. Also keep up to date with her progress and research by going to her blog on dance-tech.net P(AR)ticipate Blog

Jeannette Ginslov is specialist in Dance on Screen, for Augmented Reality, Screen & Internet. She has an MSc Media Arts & Imaging – Screendance from the University of Dundee, Scotland (Distinction) and an MA Speech and Drama (Choreography) from Rhodes University South Africa.

She is an independent dance filmmaker, producer and workshop facilitator and directs, shoots and edits her own screendance works for single screen events, installations and networked online platforms. Her works have been screened at the BBC Big Screens Outdoors UK, Danish Film Institute, Edinburgh Festival UK, British Film Institute, Lincoln Centre New York, Red Cat Theatre Los Angeles and at many other Sreendance festivals around the globe. Autopsy | Eros  “la petite mort”, has been screened internationally at fourteen different international screendance festivals. In  June-July 2012 she was in Hollywood, California where she conducted MoveStream interviews with Screendance makers for Dance Camera West 2012.

Ginslov is also a researcher and since November 2010 has been researching affect and AR within the project AffeXity in collaboration with Prof Susan Kozel, in Malmö Sweden. In May 2012 she was Artist in Residence at MEDEA, Malmö University, in Sweden, researching Affect and AR, Choreography & Screendance that resulted in a DansAR 01& 02. The projects explore dance, choreography and affect using AR and smart phone technologies.

Concurrently she is also Director of Screendance Africa (Pty) Ltd in Cape Town South Africa, est. 2012. She is associate producer for www.dance-tech.net  and produces MoveStream on www.dance-tech.net. From 2010-2014 she was Co-ordinator for 60secondsdance.dk  an annual online screendance competition, based in Denmark.

2013 she ran a series of workshops for the Post Graduate Choreography students at the University of Cape Town, Dance Department and taught July 2013-July 2014 at Rhodes University Drama Department teaching digital performance, somatic dance practice, lecturing, tutoring and supervising students form First Year to MA level, created a digital theatre work "Exploding Room", shot and edited "nightflower" Juanita Praege and was Exec Producer and editor for "Lipstick" an Hons and MA Student production. She has over thirty years experience as a dancer, teacher, lecturer, choreographer and stage director. She was founder and Artistic Director for Walking Gusto Productions estab. 2005.

The Reaccession of Ted Shawn

Hi Friends,Last month I launched the second installment of an exhibition at the Museum of Modern Art without the museum's consent.  Essentially, I was invited to re-perform some early solo works by…Continue

You need to be a member of dance-tech AUGMENTED REALITY creative residency to add comments!