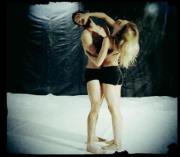 PERFORMANCE IN BEIRUT IS SUPPORTED BY:

Ali Chahrour and Emilie Thomas Mansour began their collaboration in 2010 during Takween Collective through Maqamat Dance Theatre in Beirut. "On the Lips, Snow", Ali Chahrour’s first creation performed in duet with Emilie Thomas Mansour Ali Chahrour was presented in April 2011 during the Arab Dance Platform. The performance was programmed at Maqamat Dance House in September, October and November 2011 before touring in Holland for the Festival Dancing on the Edge in December 2011. "Danas. Mawt Saghir - First Movement " is their new creation.

Ali Chahrour was born in Beirut in 1989. He was graduated in Theater in 2010 from the Lebanese University Institute of Arts. He joined Maqamat Dance Theatre Company in 2008 and participated to many creations and touring in Europe (“The Assassination of Omar Rajeh”, “Mushrooms and Fig Leaves” premiered in Sharjah Biennale). Ali was invited to a residency at Sasha Waltz & Guests Company in Berlin in March 2011.

Emilie Thomas Mansour is a dancer, writer and researcher in comparative literature. She studied contemporary dance in France and collaborated with French choreographers Jean-Mars Matos, François Veyrune and Denis Plassard between 1999 and 2003. In 2010, she participated in Takween Beirut Contemporary Dance School, in collaboration with Sasha Waltz & Guests and joined the Lebanese company Maqamat Dance Theatre in 2011.

My sisters’ lamentations have raised in me the desire to dance

My mother is crying over my grave. Her sobs make me want to sing

Lying on top of me, a corpse. Its cold flesh and dying fluids try to seduce me, pulling my body in a perfect embrace, endless orgasm

Danas exposes destitute bodies. Moving bodies in search of motivation, might it be a soul or anything that could make them reclaim their self-control. An instinctive quest for a meaning or a vanished reality. A reality condemned by religious texts and scientific progress. A reality whose only relief is to echo the farewell cries blaming its absence.

Danas inhabits the intimate moments of a buried body

A body in a mass grave, In a morgue, At the bottom of the ocean, A body lifted by men in a funeral procession, A cremated body, A stuffed body, A body without skeleton nor hips, A schizophrenic body, Amnesic

Decapitated at birth and ignored by history