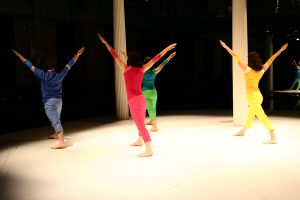 Laura Peterson's quartet "Forever," a co-presentation of Dixon Place and DNA at DNA (February 18 to 22), started off like a well-designed commercial for a high quality printer, depicting additive color mixing in the round. Playful, crafted, and nerdy, Peterson's work suppresses technique to highlight the beauty of oddness in a formalist world.

In her last work at DNA, "Electrolux," a thick white square rug had demarcated the zone of movement. For the more sentimental "Forever," a white circle of floor covering surrounded three of the space's pillars, which were also painted white. The audience was seated on three sides, the fourth side open to the mirror. Dressed in duo tones of cyan, magenta, yellow, blue, and green, Peterson and fellow dancers Kate Martel, Stephanie Miracle, and Christopher Hutchings combined to form a rainbow of possibility in the warmth of Mandy Ringger's subtractive color mixing - a whimsical light show of saturated reds, greens, blues, and yellows.

The dancers moved in various formations, adhering to the general structures of the awesome eclectic score - 24 strange and funny and alluring "mono events" by Lumberob (Rob Erickson), with electronic ambience by Dat Politics at the start and finish. With each event, it was if the dancers were avatars, resetting to the next task. Often, the four would run around the perimeter of the circle, in unison, but with an odd, twisted carriage, or hunched shoulders with arms extended.

A chicken rap song inspires them to march while waving a finger, then to prance, pliÃ©, and jump forward. Rhythmic gulping brings the four to center, contracting their spines toward each other. Each sequence builds, adding details; some repeat in reverse. Individual moments also emerge, as when Peterson leaps like a dart, long limbs contrasting a landing in deep pliÃ©, or when Hutchings convulses, punching with his entire body.

It is as if, in these moments, technique asserts itself. Peterson's body celebrates it. Even as her limbs seem to stiffen, her energy leaps outs. Hutchings resists the urge, fighting the conditioning instead. He twitches, limbs snapping outward, joints contradicting training, but the underlying sketches can never be fully erased.

Looped and layered, Peterson's "Forever" was a warm and welcome aural, visual, movement collage. Reflected like a dream in its entirety in the mirror, it was, as promised, kaleidoscopic - with just the right amount of human imperfection.