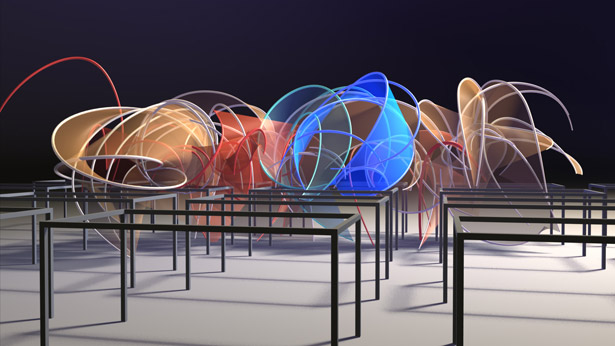 Objects in Performance
As the object has become a central issue in both theory and the arts, the Goethe-Institut  New York dedicates a weekend to intensive theoretical exchange and spatial experience to the object in performance. An installation, a symposium and a performance are the starting point of long-term engagement  with the object and related matters in the fields of theory and the arts alike.

Synchronous Objects: Degrees of Unison is a multipart sound and video installation focusing on “One Flat Thing, reproduced,” an ensemble dance by William Forsythe.

Focusing on the choreographic visualization online project Synchronous Objects created by Norah Zuniga Shaw, Maria Palazzi and William Forsythe, the installation brings viewers into an encounter with the deep structures of a dance and the generative ideas contained within. A series of visual objects—animations, computer graphics, interactive tools—enact a parallel performance of Forsythe’s choreographic ideas. The work was first launched online in 2009 and is still available in this form. In the installation, Norah Zuniga Shaw stays close to the conceptual foundations of the online original while extending them into the architectural and experiential possibilities of the Goethe-Institut Wyoming Building. In addition to interacting with the site and viewing HD animations from the project, visitors can spend time within a circle of synchronized visualizations unfolding from dance to data to objects over the 15-minute time span of the piece. William Forsythe’s voice calls out timing to the dancers and the sounds of the dancers’ actions move in multi-channel choreography around the space. Finally, a paper proliferation of creative processes can be found to read, leave behind, sort, or carry home.

The recent phenomenon of object-invested experimental dance and performance echoes the resurgence of the object in recent philosophy, critical theory, literary and cultural studies; as well as in the renewed interest in the concept of the object in the visual arts. This resurgence of the object also has implications for studies on subjectivity. If, as Deleuze once said, “the status of the object is changed, so is the subject’s,” it is crucial to investigate the contemporary nature of this phenomenon. The Objects in Performance Symposium will gather a group of renowned American, German, and international scholars and artists, from a variety of fields and perspectives, to present their most recent research on the matter. The environment will be such as to stimulate exchange and conversation between disciplines, and between artists and scholars.

Cherries have tender skin, meat and a kind of bone inside them. Their juice is red like blood. When you treat them like humans sometimes treat other humans, then they become human themselves or at least animated objects, which invite you to identify yourself with them. In the performance Death is Certain, Eva Meyer-Keller has installed sweet cherries as her protagonists.

The viewer is reminded of deaths from films, but also the reality of executions, how they really happen: associations from individual and collective experience in face of the sweet death at the kitchen table.

The Goethe-Institut New York is a branch of the Federal Republic of Germany’s global cultural institute, established to promote the study of German language and culture abroad, encourage international cultural exchange, and provide information on Germany’s culture, society, and politics.

Laban space harmony theory and the BESS paradigm for observation surely informs and can be informed by this ambitious exhibit. I definitely think CMAs out there should go to the opening.