Berlin-based collective StratoFyzika is currently in residency at Lake Studios Berlin as part of the DanceTech AIR, under the mentorship of Isadora creator Mark Coniglio. As we continue developing our latest project, Phi, we will continue to blog about the process.

We're at the point of putting it all together, finding transitions between sections, or conversely, non-transitions (this would be like a blunt change of thematic direction with no legible attempt at a smooth segue). It's interesting to me how the piece can start to become the transitions, and vice versa. That is, how a sharp, sudden shift in tone (resulting from one of these 'non-transitions') can start to inform the structure and meaning of the whole work. For instance, without giving away too much, we're playing with sharp, surprising shifts in lighting to help define segues and lead to what we know as a new section (though the audience, of course, won't necessarily read it that way). As we experiment, I am reminded of just how much lighting – such as a simple on/off – shapes and changes my perception of space and time. Particularly as an audience member attending a performance, sitting in darkness while watching a highly lit area, when the stage lights go off, you are literally blinded, nowhere and nowhen. It can feel like an eloquent palette cleanser, or a disorientng goof, depending on how you use it. Regardless, it always makes me suddenly and irrevocably aware of myself and my body, because that is all I can sense in that moment. So then that dislocation, especially if you use it repeatedly, becomes a palpable feature of the piece.

Movement-wise, I'm starting to settle into it more, to better understand how I physically inhabit it. Formally, this piece can be quite complex. One section in particular is structured very intricately and requires constant counting, but the counts and rhythms between Hen and I alternately go in and out of sync, so I have to be careful not to get so caught up in her timing that I lose all track of my own, or conversely, to become so self-focused that I miss those moments of synchronicity with her. It's a delicate balancing act between autonomy and connectivity. Likewise, the ceaseless counting can start to bind me physically, so I have to remember to find release and abandon within the control, something I think every artist can relate to.

Keywords for the lighting work are

The lighting transforms the stage during the entire performance into an architectural machine . Four stage lights are positioned at the 4 highest corners of the stage, while two projectors are on the ground along two opposite sides of that same square. Playing with the different nature of PAR cans lights and projection, we aim to find interesting ways to reveal the bodies and tell their movement .

From the very beginning of our work on Phi, lighting sound and movement have been developed in parallel. This kind of workflow has been very satisfying in the way every small progress in one of the fields inspires unexpected approaches to the other two.

One of the very first ideas was using quick flashes to highlight small portions of the bodies. This way we could reconstruct the choreography by showing/hiding, putting together small chunks of the original movement and giving it another shape. We could easily notice, during these tests, how the body transformed into a composition of many other bodies while being sculpted and dissolved.

The flashing, coming from different directions, was particularly disorienting when seen from the static point of view of the audience and these body chunks, once immersed into that specific space/time environment, were opening up to new possibilities and interpretations.

When we met again at Cultivamos Cultura (Sao Luis, Portugal) for the first residency, watching an updated version of the choreography where the different materials were coming together in the shape of real sections inspired me to push this flashing idea further. As the simple body movements were chasing each other in repetition and variation, the lighting score could lose its spatial randomness and start following a circular path ( the one of a loop ). This way the stage became a rotating reference frame in which the perception of said repetitiveness could be distorted by speeding up and down this visual looping reference clock.

4 lights at the 4 edges, fading in and out one after the other, as to give a key to read the inner repetition happening in the movement. As your perception of the motion of a train changes if you are you sitting on another train moving in parallel to the first one.

The idea of having an audience on two sides came when we were brainstorming about lighting positions in relationship to choreographic pathways. As we noticed it could be interesting offering two simultaneous points of view, the movement was redistributed in the space according to that, and we added to the set-up two projectors pointing towards the center of the stage from opposite sides .

The use of projectors makes it possible to work at higher speeds, and the character of their light beam, combined with a fog machine,  is able to fill the space with solid dense physical light. The space surrounding the stage disappears in the dark. While the dancers move through it, they pierce that material and phase in and out with a backlight - frontlight repetition game .This particular lighting suddenly brings the audience way closer to the performers, creating a much more intimate environment. 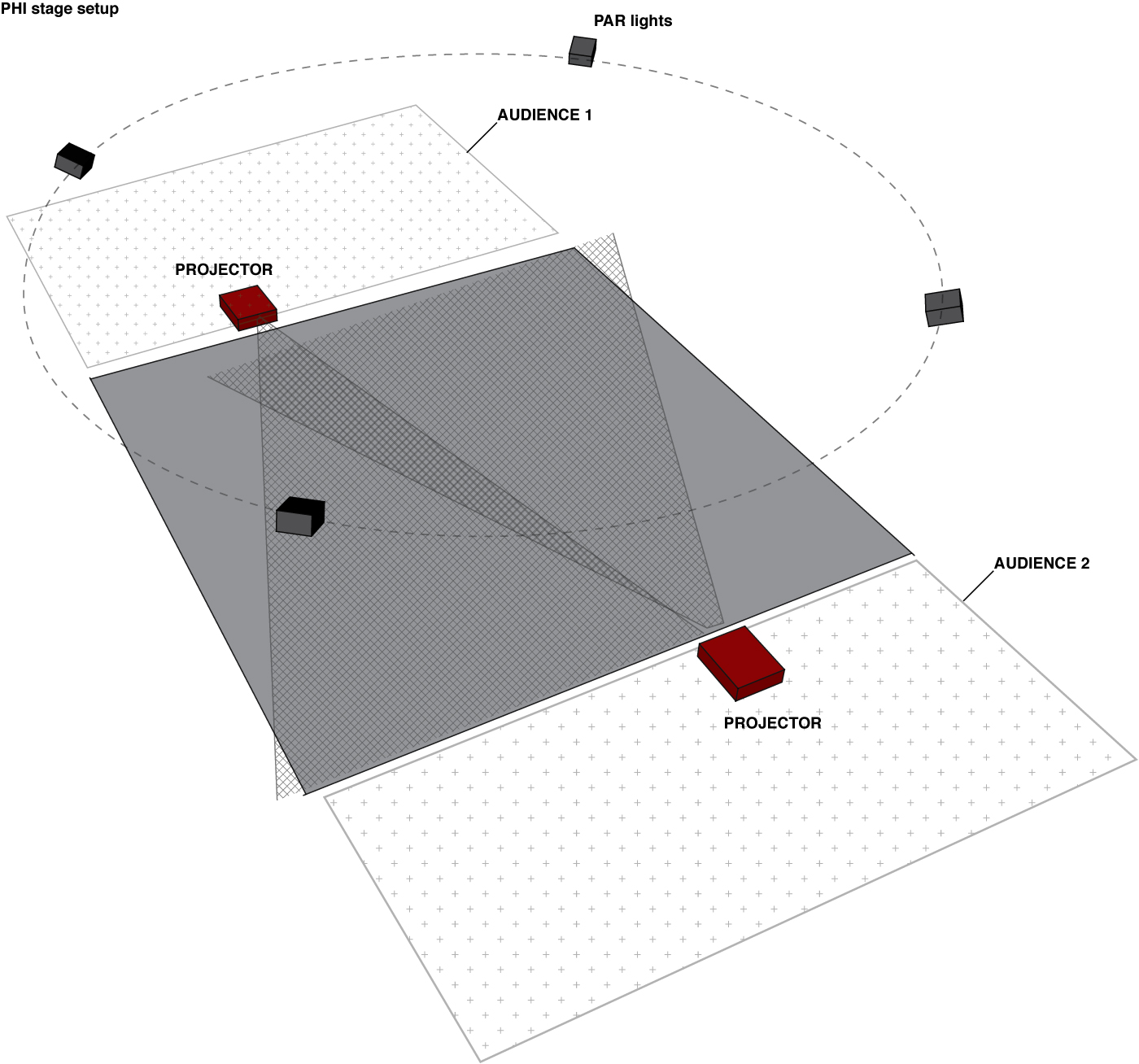 For this piece we decided to win some time using already-assembled sensors systems by x-io technologies, rather than starting from scratch and design our own as we did in the past.

The two sensing units, one for each dancer, are equipped with accelerometer, gyroscope and magnetometer. We are currently experimenting with calculations between these data to be able to extract interesting values to be used to control properties of light and sound.  An interesting approach could be calculating difference values between the two body movements, to be able to highlight the phasing out that gradually happens after a unison. (Anthony McCall´s work inspired the use of projectors and fog to create physical lighting dimensions). 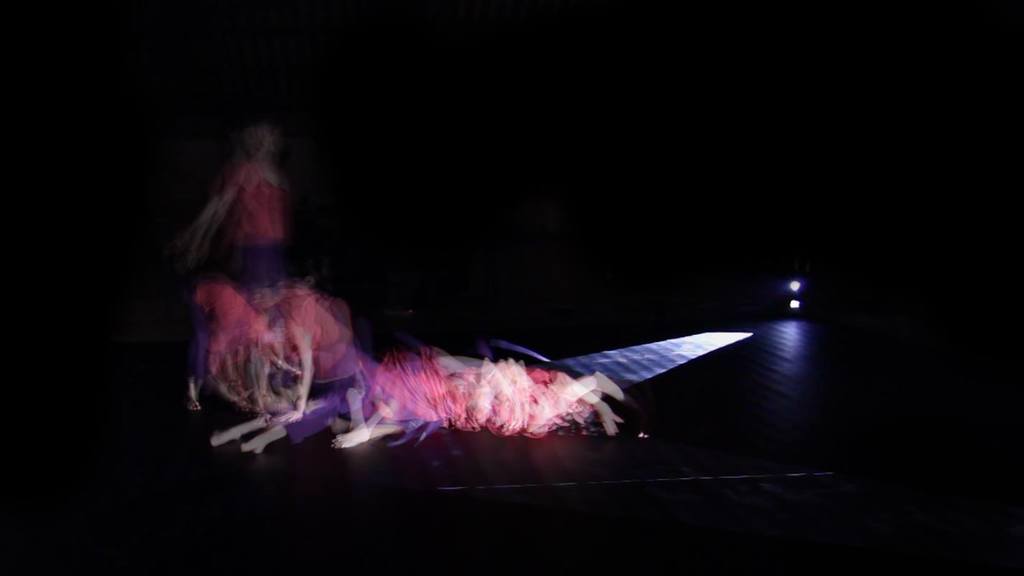 (Photo edit of Daria Kaufman in rehearsal for Phi) 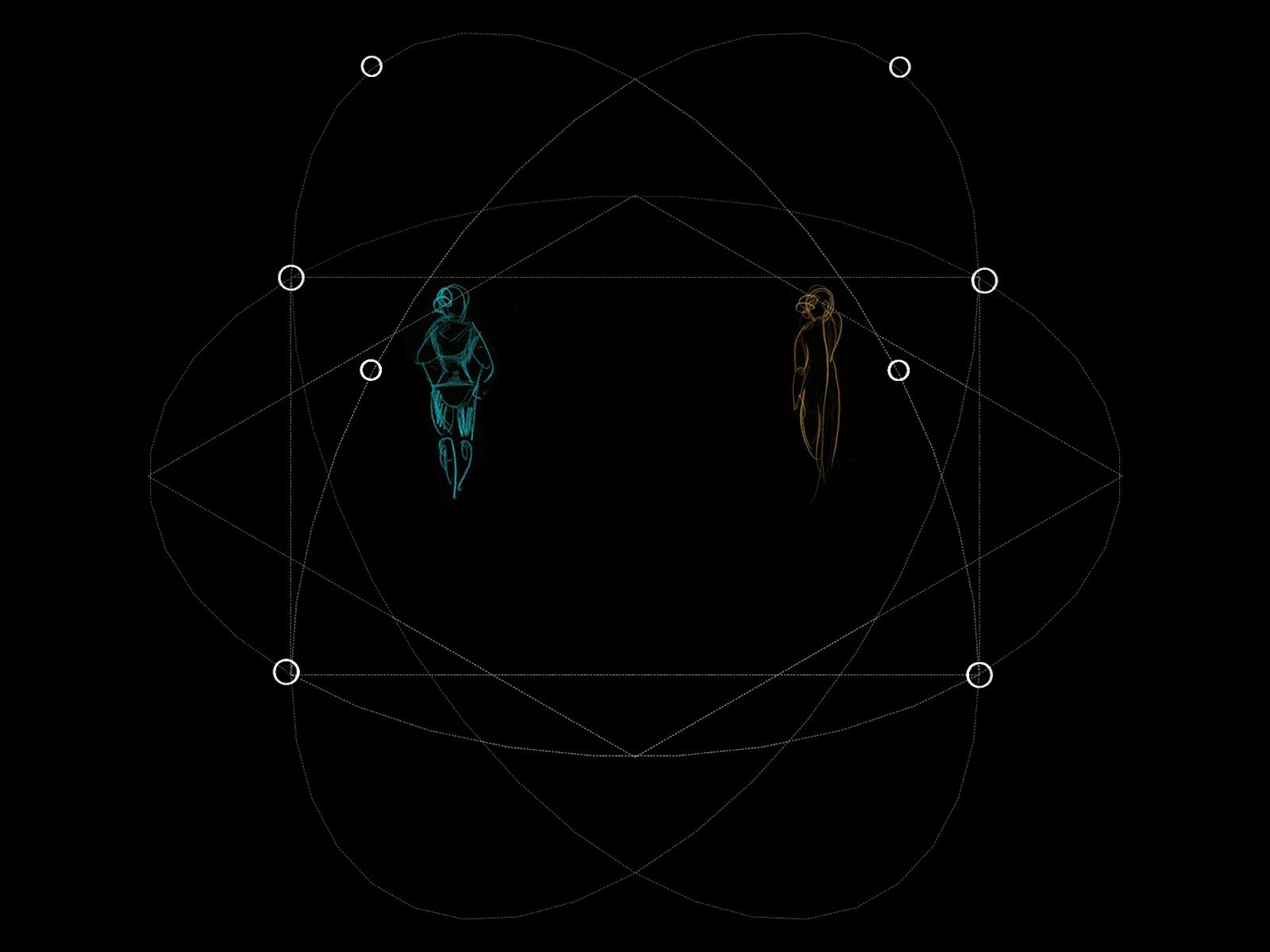 (Schematic of lighting trajectories in Phi)