“Modern Dance is Modern Art.” That’s what Laura Peterson tells her dance students, and it’s a teaching she follows rigorously in her company’s new work, “Forever.” This is dance strictly as a visual object, the elements being four dancers in four colors, moving on a white oval floor, among four faux Grecian columns and a mirrored rear wall. The set is vaguely reminiscent of the modernist paintings of Dali or de Chirico, but the dancing itself is even more abstract. Always a minimalist, Peterson makes art by strictly limiting her choices. In "Forever" there’s no emoting, no acting or miming, not even any touching. It’s just snippets of movement, driven by sound. Sometimes together and sometimes apart, the four run around in circles, march, jump, crawl, point, wiggle, spin and fall, roll, twiddle their fingers, bourree on their toes, cave in their chests, sprawl on the floor etc. and end up as they started, running around in circles. What’s going on? Turn the page.


“Forever” is minimal, but the title hints at its ambitions. The score by Rob Erickson consists of 26 vocal motifs, an alphabet of “mouth music” looped and layered into short sections that contain elements of language but stop short of words. The choreography gives each section its own motif of repetitive movement – drawn from athletics and everyday life as well as ballet, modern dance, martial arts, and a kind of absurd industrial activity, such as walking around plucking things off invisible shelves. But just as the vocal score stops short of words, the movement stops short of any complete sequence of action. There’s no story at all. Like the first abstract expressionists, Peterson has returned to a pre-narrative world where color, shape and movement regain their original values. It works, because it makes you look again, for example at colors, brilliantly set off by the lighting and the luminous white floor. Peterson herself is in red but it’s not all red; she defies the laws of fashion with a top that’s more like orange.

As for movement, watching Christopher Hutchings run, fall, roll, and shake himself off is like watching a good ballplayer do his work on the diamond. Rough and fuzzy around the edges, he’s the opposite pole to Peterson’s focused, driven energy. These two have collaborated for years now, so closely that they can do the same movement in perfect sync, and communicate two different feelings and intentions. Man at work, young woman willing to sacrifice herself to save the world. Peterson sometimes has the inspired, haunted look of Joan of Arc.

What? Can an abstract work of art have such lofty intentions? I remember being struck by one explanation proposed for the rise of abstract painting in the early 20th century, that it was a protest against a world that had become too brutal and noxious to engage on its own terms. Consider that just a few years ago, Laura Peterson was a satirist. Her 2005 “Security” was a spoof on our national obsession with tracking each other, performed on hands and knees in insect garb under a bank of surveillance cameras. But satire seems an inadequate response to the world meltdown-in-progress of 2009. Maybe the answer is to retreat into timeless, fundamental categories of perception, to preserve something human amidst the wreckage.

Not incidentally, “Forever” is a pleasure to watch. You can take it simply as a kaleidoscope, with the sound score acting as the engine to turn the lens and set off a new series of changes every two minutes or so. The sound is loud and funny, with many references to the rough rhythms of everyday life, such as a repeated “boom – boom WHOMP” that sounds like the old applause machine at Shea Stadium, which is now, not incidentally, a pile of wreckage, replaced by a field named for an insolvent bank.

The nice thing about “Forever” is that it can remind you of anything. Besides baseball I was thinking of “Finnegans Wake,” which also has a circular structure, four parts, repetitive themes and snippets of action rather than a narrative. The point of Joyce’s masterwork was that nothing is lost in the great river of civilization, that everything that disappears will rise again. The point of “Forever” could be that when human beings hear sound in rhythm, they have to move, and that’s what makes the river run. 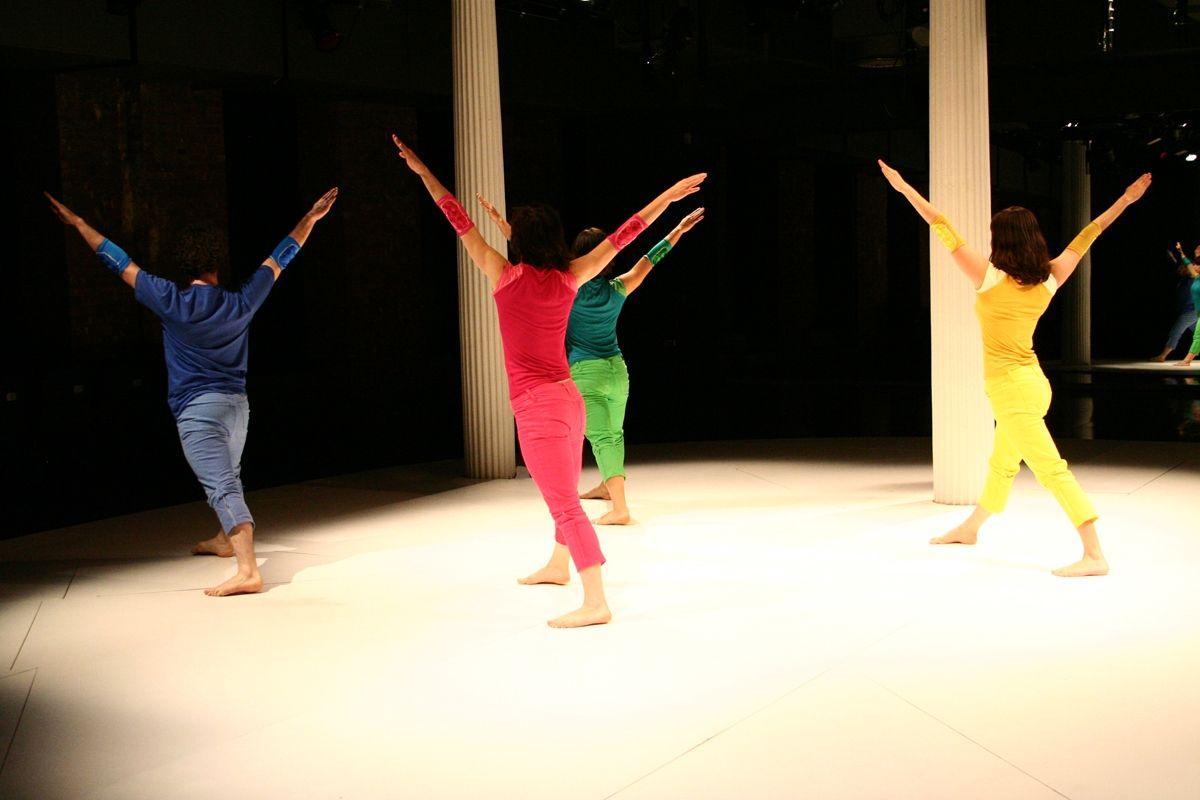