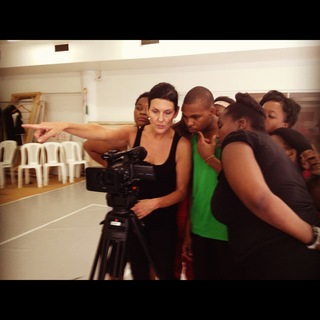 These workshops explore the genre of Screendance. The workshops are based on the unique shooting technique designed by Jeannette Ginslov namely, Camera As….Loading The Frame In Screendance. This was inspired by Ginslov's research on: Aristotle’s notion of Rhetoric, dance filmmaker Douglas Rosenberg’s “camera as carnivore” and Ginslov's research on capturing Affect. A workshop on editing, DVD production, uploading, documenting and archiving your work, could also be arranged.

Guy Ndoli, the Director of this work won the Jury's Choice Award at the Student Screendance competition

at the University of Utah May 2013. The dance video was produced during a Screendance workshop

Camera As….Loading The Frame In Screendance

This process highlights affect and the intention of the screendance maker. It amplifies the audience’s reception and appreciation of the emotional and kinesthetic, in a non-linear narrative framework.  Through a series of shooting exercises, using formal as well as experimental or improvised shooting methodologies, static and hand-held camera, with story boards or scores for an improvised shoot. The workshops focuses on the use of postmodern dance practice as well as the cinematic genre of Dogme 95 and a non-linear filmic practice.

b)     Teams will then plan, shoot and edit, a 2-3 minute screendance work. Each team will elect a director, cameraperson, editor, choreographer, dancers, producer etc.

Other modules could include:

a)     Documenting Your Work, Performance and Rehearsals

b)     Screendance for live performance works

For more details see Jeannette Ginslov’s online Dance Film’s Association document where she offers a detailed synthesis on Aristotle’s Rhetoric and how to apply theoretical concepts to the filmmaking process in "Camera as........Loading the frame in Screendance" 16 August 2011. http://www.dancefilms.org/dfa-october-news/ 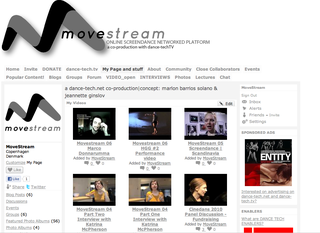 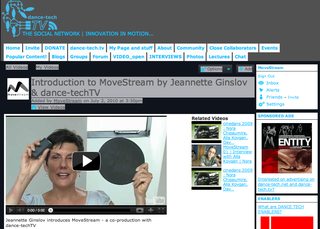 MoveStream provides an interdisciplinary platform that investigates the crossover between the boundaries usually found in media/dance/cinema/video and the internet 2.0. It provides a fresh and adaptive evolving domain for the public to engage with culture, choreography and performance. As a networked phenomenon, it encourages a much needed flow and exchange in Screendance discourse. It offers a new Screening portal for Screendance makers with the possibility of developing new online performance vocabularies that reposition dance performance as a multi-sited, digitally mediated art form. Ease of accessibility encourages viewers to engage with the ontologies that are foregrounded in the interviews. It also serves as an open archive for Screendance works, preserving the past with the capability of re-informing the present.

Video interviews and vlogs of performances can be produced for festivals, conferences, workshops etc. This could work in tandem with dance-tech.netTV. Teams of vloggers can be trained to shoot and upload material from the festivals onto dance-tech.netTV

A lecture on MoveStream and the use of the Internet 2.0 as a promotional tool as well as vlogging, documentaries, teasers for the promotion of work.

This will include a demonstration of MoveStream’s videos on line that use tagging and annotations as a tool for online distribution and sharing.

a) Vlogging – shooting and editing interviews, events and documentaries

b) Shooting and editing trailers and teasers for online distribution

Online Documents:  “What you see is what you get!” 21 Hot/Easy/Quick Vlogging Tips to shoot online interviews by Jeannette Ginslov 07 May 2011. On dance-tech.net

Jeannette Ginslov offers a variety of lectures based on topics that are pertinent, relevant and useful for any Screendance maker. These are based on Ginslov’s many years of extensive practice and research in the following topics: 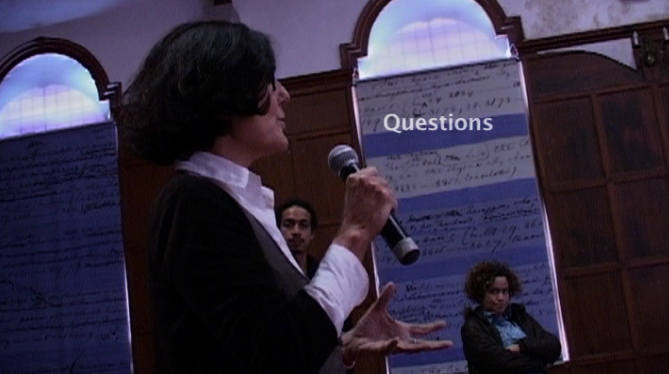 a)     “Uncovering the differences of Affect and the haptic in Screendance.” Based on research by Ginslov as Artist -in-Residence for the AffeXity Project with Prof Susan Kozel at MEDEA, a research centre for collaborative media at Malmö University, Sweden

b)     “the concrete and the digital - emotional and kinaesthetic amplification of the authentic and digitalised body in screendance” Ginslov’s MSc in Screendance Dissertation topic.

The Gordon Institute of Performing and Creative Arts

Playlist of all Screendance and Choreographic W/S One hour preparation and x3 hrs face to face teaching

Accommodation, Per diem and flights should also be provided.

The package can be designed to suit your needs:

You may combine a number of Workshops/Lectures/MovestreamTV/Lectures/Vlogging.

* *The facilitations may also be combined with Marlon Barrios Solano’s WGL - World Grid Lab as hosted on www.dance-tech.netTV, if we are both invited to the Festival/Event/Facliations. Rates are negotiable.