The performance she choreographed and performed was collaboration with multimedia artist Hubert Pichot, known for his project ‘Try Me’ Rolling Chair Jockey - RCJ which he had introduced at the iMAL’s OpenLAB Projects in Belgium three years ago. About what Pichot said back then: ‘RCJ (music and vidéo compatible) is an electric rolling chair with sensors measuring its move and acceleration, and also some of the moves of its user. A computer processes the sensors data and generates images and sounds. The person using the chair becomes a sort of conductor controlling an audiovisual creation through his/her moves in and with the chair.’ 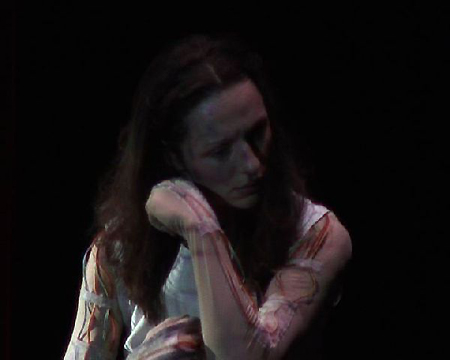 
Along with this line Hubert Pichot designed an experimental wearable sound device for dancer in order to give her a tool for generating soundz connected with her movements via bending wires and pick ups through accelerometers to computer and mixer at the end.

Jasmina Prolic dances 'tuned on' with minimal, transcendental movements at the beginning, which grows up as the dramaturgical structures are growing too, into rhythmically more completed textures… 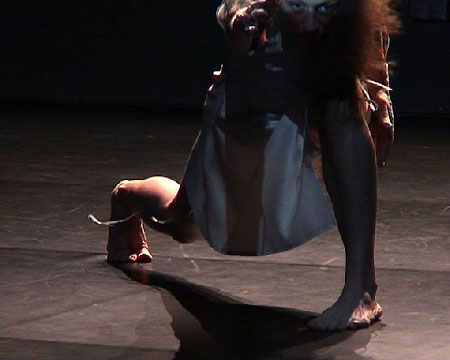 
The piece is fragmented into smaller parts which are developed through wordz / dialogues with a man ‘behind’ the ‘technological wall’ emanating himself through video installation and complex DIY electronic sound device letting different sounds to come out depending on dancer’s moves. It’s a kind of a sound mapping of their virtual communication based on practical physics (more precisely micro-kinetics) - her dancing. 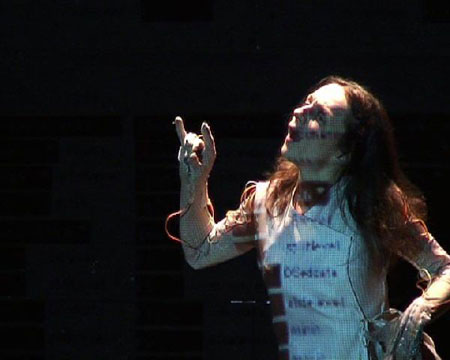 
Although, the use of such devices could be constraining for the performer, seems like Hubert did a great job with his real-time sound device, Jasmina Prolic accepted it superbly as part of her body, mainly because it’s a communication tool between human being and entity of electronic nature, if you understand it banally.

Prolic deploys a sort of micro-inquiring within her body narration and technique creating an artwork of emotional depth… She is questioning the issues of being emotional and physical attached via technology to another person, and the possibilities of having the same relation as if this person would be made of flash and blood…

Because of choreographer’s intention to go further the whole story is not finishing with a pair of lovers running through the meadow into each others arms… But seems like this whole ‘wired’ love is functioning with some boundaries… which leads you to the point where, as a viewer, you can realize that lots of thingz in our lives turned out in some direction because of our previous expectations… Can we accept relations with ‘entities’ and being emotionally involved with… well, actually we already live this life without even perceiving it, or maybe we all like to live in certain oblivion… 
Jasmina Prolic is a Sarajevo ex-ballet girl on her ‘movable’ life journey, heavily ‘spiced’ with contemporary dance, in France… At the beginning of 90’s Jasmina was already an award winning ballet dancer and member of Sarajevo’s National Ballet Ensemble … but due to terrible thingz which started to happen in Bosnia at that time, she first found refuge in Zagreb, and then she entered at The National Superior Conservatoire of Dance and Music of Paris in order to study Contemporary Dance.

Her graduation dance piece was her first solo work ‘Sarajevo, 25th of April 10 o’clock in the morning or Why?’. Jasmina Prolic has received Award for French Young Choreographers in 1999; she was a member of the Junior Ballet of the CNSMDP from 1996-97, which followed the residency - danceweber at DanceWeb Project within ImpulsTanz in Vienna in 1998. Artists she had collaborated with are: Jean Claude Gallota, Maguy Marin, Joachim Schlomer, Palle Granhoj, Gildas Zepffel, Gildas Bourdet, Balazs Gera, Maja Pavlovska, Szilard Mezei, Albert Markos, Henrik Jaspersen et Ko de Regt (Duo Resonante), Jérome Poret etc. 
Lucid choreographer Joseph Nadj invited her in 2002 to base her very own dance company in Orléans (France), which was initially a new trigger in her carrier, not just for her solo artworkz but for promoting younf dancers and companies from South Eastern Region… Jasmina Prolic is spending a lot of time on givin’ dance workshops and classes in this region…

From 2007 she is an art consultant for Nomad Dance Academy regional network presenting the Bosnian organisation for contemporary dance Tanzelarija; and she have an active participating role in the Balkan Dance Network and IETM. She’s the organizer of ‘Choreographic Meetings of the Balkans’ dance event with the National Choreographic Centre of Orléans and National Scene of Orléans in France. Jasmina is artistic director of the First Bosnian Contemporary Dance Festival ZVRK in Sarajevo. 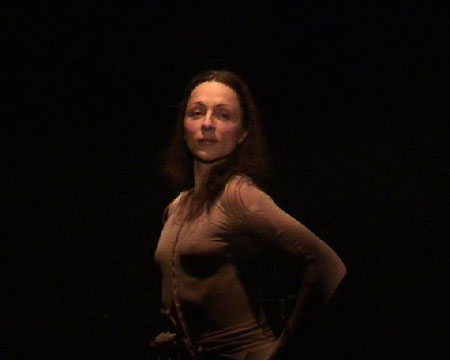 
After such a technical complex dance piece ‘Julie(t)- duet in absentia’ with a dancer immersed deeply in the theme, I couldn’t resist not inviting Jasmina for a small talk on her solo work… technology… about her challenges…about ZVRK … and all that stuff…

Hi, Jasmina! Could you please tell me something about that how did you first get involved with technology? Something that actually can’t be controlled in a way you can control your own body and expressiveness…

J: Hubert Pichot and I met while working together on the theatre production in February 2006. Then he introduced me with his technological stuff and expressed a wish to work with a dancer in order to create a live instrument!!! He said he would like to work on Romeo and Juliet by Prokofjev, but I replied that Romeo and Juliet that I think off are written by Shakespeare. In that sense I was ready to enter the adventure of exploration for a live instrument, not being interested in the love story, but in the conflict and all that destroyed love. 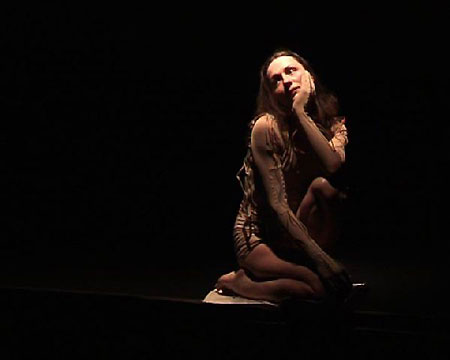 
Are you planning to work or develop the same working process within ‘Julie(t)- duet in absentia’ or some other future performance?

J: The work with Juliet isn’t finished yet; we’re still developing and rethinking this piece. Maybe, if I will feel the urge, I’ll provoke something similar in some other project.

In your opinion, what is the perspective of a human moveable body through dance in the context of technology?

J: Well, there are so many things in that context that need to be discovered. It also depends a lot on what you want to express, in what direction you want to develop and what kind of message to send.

Do you think that you can expand your possibilities as a dancer by using experimental performing devices, DIY tools, data sensors and so?

J: These devices push you in some very different ways to use your body and to develop conscience about some still undiscovered parts and possibilities. But, they influence your style also. 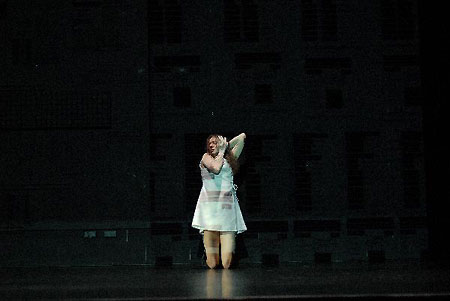 J: I can only thank him for everything.

What do you give to dancers on one side and learn from them on other side in your international classes?

J: When I teach, first of all I give respect and get human quality. Sometimes, I learn everything from the beginning…

What could you tell me about the development of dance scene at the moment in South Eastern Europe, in the European context?

J: Although I am not completely familiar with the whole South-East European scene; dancers and choreographers that I do know can with confidence stand side by side in the European context. 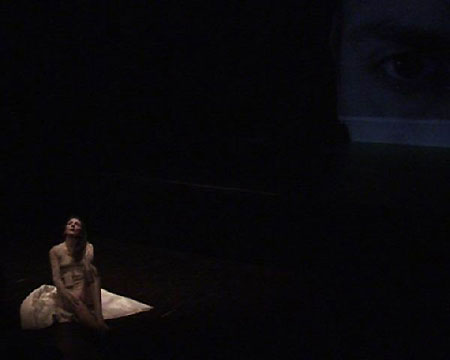 
The first Bosnian Festival for Contemporary Dance took place in September in Sarajevo… That’s great news for young people willing to expand their experiences in the field of contemporary dance, but also for society and the city of Sarajevo in general… How do you see the future of the scene that will certainly emerge from it in ten, twenty years from now?

J: Who could know how the scene will look like tomorrow, not to say in ten or twenty years! (laughs).
I only hope that something has finally been moved. This first edition convinced us of the great need for this kind of events in the contemporary societies; so we can’t give up. Dance makes you free and gives you a chance for interaction. There are no limits and that is what we really need.
In any case, it won’t be easy, but it never is in Bosnia and Herzegovina! ‘Nice and easy’ approach. And maybe the standing tomb-stones will revive through our bodies; they’ll become off petrified and therefore even nicer and stronger.

p.s. Bosnia and Herzegovina is well known for archaeological sites of medieval tomb-stones.

(This blog post was originally posted on Personal Cyber Botanica at www.lomodeedee.com)