Instability of the Visible, Paces, by Petra Zanki & Britta Wirthmüller 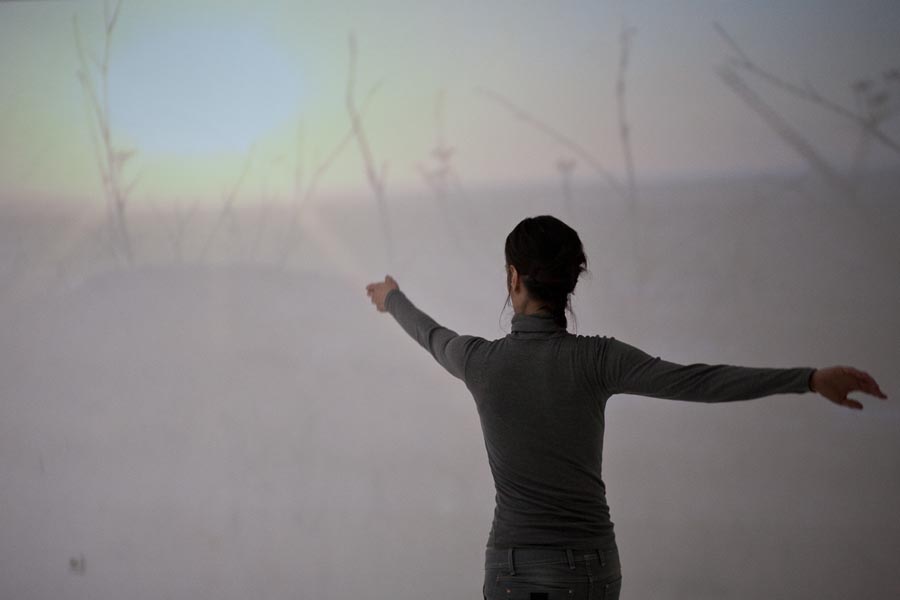 The dance solo called Paces is part of the Antibodies Cycles, in which Petra Zanki and Britta

valued as possible.” The project focuses on those marginal bodies that are, like some sort

of a Minotaur, pushed far away from the view of others and into the labyrinths of the society,

in order not to disturb the existing social/market/political systems. Thus, the Antibodies Cycle

explores bodies without a defined sex, abandoned bodies, or bodies that suffer violence by

Paces are taking place in the achromatic space of a white studio (as I wached it in rehearsal studio of Zagreb Dance Center), with a dancer dressed in grey. A few plumes of smoke are sufficient to question the visibility of things, to shift space and dissolve the body. Semitransparent projection of a landscape shot through the leaves of grass quivers lightly on the wall, and in its reflection in the mirror. In the second part of the performance it is the minimalist music by Phill Niblock that repeatedly fills the space.

movement – the sway. At first, it is a slight transfer of weight in which arms are introduced

gradually, followed by the dancer circling around her bodily axis. Upon

exhausting its momentum, the sway moves on to another part of the body, to the arms, the

hips, or the head; at certain moments, it experiences gradation as it draws in the torso and the 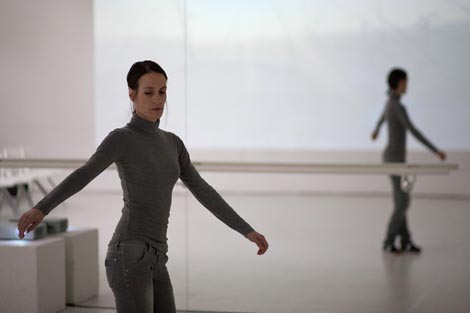 The sway and its variations are performed mechanically, in an abstract manner, analytically. Visible, almost tangible is deep and almost mystical concentration of Petra Zanki, who never abandons herself to the movement, allows the movement to take her further into space or into emotion. The pure and precise structure of the choreography remains perfectly minimalistic, even poetical in all its purity and the discreet presence of the dancer.

What is initially experienced as mechanical movement, through duration and

the architecture of sway is transformed into the permanent instability of the visible. In a paradoxical manner typical of minimalism, the alternation of variations and repetitions, brings to the surface, the essential quality of humanity that lies behind the performance.

Paces can be viewed as a work of pure choreographic formalism, or as audio-visual installation,

but also as a performance on the politically engaged subject of body vs. antibodies. But

whatever starting point we may take, Paces always returns to its source, which speaks of the intelectual discipline of authors, and the complexitiy of its approach.