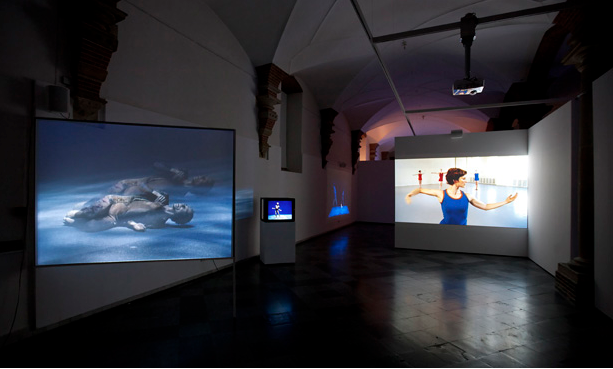 This spring, De Hallen Haarlem is presenting Discount Body Parts, Charles Atlas's first ever comprehensive museum exhibition. Born in St. Louis, Missouri, in 1949, Atlas is known above all for his groundbreaking work in collaboration with choreographers and performers like Merce Cunningham, Michael Clark, Yvonne Rainer, and Leigh Bowery. Atlas actively crosses the borders between the fields of dance, performance, and the visual arts. Starting out in New York in the early 1970s, Atlas was part of the first generation of artists to explore the artistic possibilities of video. With dancer/choreographer Merce Cunningham, a close collaborator for much of his career, Atlas developed what he described as 'media dance,' a radically new way of incorporating the camera into live performance. Rather than using the camera as a static recording device, Atlas and Cunningham started to develop pieces in which it played an active part in the choreography. Much of the exhibition will be devoted to a video installation that fills the whole of the room, highlighting these collaborations with Cunningham, whose dance company gave its last performance on 31 December 2011.

MC9
Discount Body Parts brings together several crucial aspects of Atlas's artistic practice. In the sweeping multi-channel video installation, which is entitled MC9, excerpts from his long-time collaboration with Merce Cunningham (1919-2009) are combined into an immersive audio-visual environment. Using footage from twenty-seven media dances, documentaries, and other material created with Cunningham over a period of forty years, MC9 showcases Atlas's ideas about reinterpreting, editing, and presenting existing material. Freely drawing on his image archive, the artist has developed a synchronized multi-channel video and sound installation that responds to the spatial characteristics of the monumental seventeenth-century exhibition space of De Vleeshal. The installation includes scenes from acclaimed media dances like Fractions (1978), Locale (1980), Channels/Inserts (1981) and Ocean (2011). Atlas has developed an idiosyncratic approach to editing, in which he employs graphic components like monochrome screens and countdown timers—allowing him to precisely (and rhythmically) direct the temporality of each individual screen in relation to the experiential time space of the installation as a whole.

Joints 4Tet
In addition to MC9 and single screen 'video portraits' like Teach, 99, and Ten, the exhibition will host another whole-room multi-channel installation: Joints 4tet for Ensemble (1971-2010). The installation combines footage from a series of Super-8 colour films made by Atlas and Cunningham in 1971, to which Atlas added unpublished ambient recordings by John Cage in 2010. Joints 4tet for Ensemble is a four-channel installation that plays out over a constellation of ten different sized monitors. The monitors are lit by a couple of slowly panning theatre lights that throw dramatic shadows on the walls of the exhibition space. The footage shows close-ups of Merce Cunningham's wrists, elbows, ankles, and knees, testifying to the dancer's unique physicality. Atlas and Cunningham filmed outside the studio on a warm afternoon, after a rehearsal in California. By adding Cage's soundtrack, which was recorded in different cities that Cage travelled to with Cunningham in the 1980s, and is made up chiefly of the sounds of the city, Atlas subtly pits the individual fragility of the human body against the immersive chaos of the urban environment. In this work, as in MC9, notions of the fragmented body, and of the fragment versus the whole, are linked to the medium-specific possibilities of the multi-channel video installation.


Charles Atlas's work has been represented in the collection of De Hallen Haarlem since 2009. His films Nevada and Floor (both 1974), made in collaboration with choreographer Douglas Dunn, are important works in the museum's collection of performative film and video art.

Charles Atlas's widely-exhibited work was recently shown in the South London Gallery, the New Museum, and the Museum of Modern Art in New York. His work is currently part of the Whitney Biennial. In the past few years De Hallen Haarlem has shown Atlas's films in several group exhibitions, such as He disappeared into complete silence (2011) and Body/Space Mechanics (2010). Alongside Charles Atlas's exhibition, De Hallen Haarlem also presents the solo exhibition La Vache Qui Rit by Hamid el Kanbouhi, and a display of recent acquisitions.