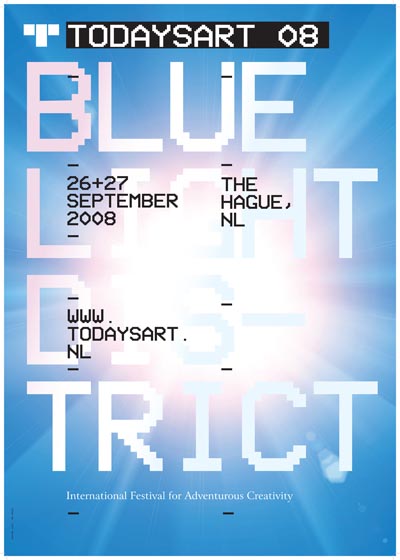 TODAYSART FESTIVAL 2008
On September 26 & 27 thousands of fans of adventurous creativity will come together in the Blue Light District of The Hague (The Netherlands) for the TodaysArt Festival 2008, a weekend of unique, inspiring and challenging artistic performances and projects. Expect a concert with trains at the Central Station, Vide Accordé, a dance performance in cranes, Chunky Move with Glow, monsters that are after your shadow, an interactive skatepark and amazing music performances in concert halls, churches and clubs (among others: !!!, Nouvelle Vague, Seabear, God Is An Astronaut, Poni Hoax, Aquanauts (Underground Resistance), Byetone (Raster Noton), Deadbeat, Isolée, Pier Bucci, Lindstrøm, Prins Thomas, Dick Raaijmakers, Michel Waisvisz (In Memoriam), Claro Intelecto and Ben Frost.)

Since its first edition in 2000, the MUTEK festival in Montréal, Canada, has distinguished itself as an international rendezvous for original and avant-garde programming. In terms of content the festival’s range strives to be diverse, with interests in both the experimental and the playful sides of digital creativity. MUTEK intends to create a sonic space that can support innovation in new electronic music and digital art. Over the years, the MUTEK festival has presented a considerable number of internationally renowned artists while simultaneously providing an important showcase for upcoming talent. The festival provides an open, inviting environment that encourages rewarding exchanges between artists, professionals, and the public; MUTEK is a point of convergence, drawing participants from all over the world to profit from a context of active discovery.

Dis_Patch / http://www.dis-patch.com
TodaysArt is proud to announce a new collaboration with Serbia’s most adventurous festival of cutting edge music and related art, Dis_Patch. With similarities in aims and approach, Dis_Patch and TodaysArt have come together for a first time collaboration for the occasion of the 2008 editions of both festivals in Belgrade and The Hague. The political relationship between The Netherlands and Serbia has been - and is currently - under a lot of tension. The cause is a selection of political events taking place at the International Criminal Tribunal for former Yugoslavia, in The Hague. Through forms of artistic and cultural collaborations, TodaysArt and Dis_Patch strive to improve these political tensions. At TodaysArt 2008 Dis_Patch presents a program with: Wo0 (Belgrade Noise Society), Piece of Shh…, DJ Moodswinger and VJ Nenad Popov.

Extrema / Green Label Night / http://www.extremamusic.com
Together with booking agency Extrema Music, Joris Voorn and Edwin Oosterwal will host Paard van Troje’s small room during the Friday night at the TodaysArt Festival 2008. The night is called a Green night. Green is the label run by Joris and Edwin and. But the night is more than a label showcase. It’s a night that promotes high quality techno music. The line-up for this night promises to be a late night venture featuring Chymera and Robert Babicz.

Arcadi / Némo Festival / http://www.arcadi.fr/nemo
Némo is a cutting edge French audiovisual festival that produces and promotes new cinema and digital arts. For 10 years, Némo has featured live audiovisual performances, multimedia installations and new images screenings (its international short films panorama shows feature the best of computer animation, motion graphic design, music videos and all diverse advanced and experimental cinema). After each festival’s edition, Némo’s programs are also re-played in other international festivals. Némo will also show traditional and digital short animation films for children in the afternoon, the “3D KIDS” program, first presented at the tenth edition of the Némo Festival 2008 in Paris. For the first time in The Hague, Arcadi -Némo’s producer- is proud to showcase 7 programs at TodaysArt.

<>TAG / Sousveillance, <>TAG-lab / http://www.tag004.nl
There’s no way to miss the auto-participative choreography on the Turfmarkt. First of all, because it’s huge. Secondly, because participation cannot be avoided. The choreography annex performance annex new media installation might just look big, but there’s an even bigger plan involved on a higher level. A real-time rendering system is parsing the live video feed from the Turfmarkt, erasing and converting the formless huge props on the sidewalk into meaningful accessories for a play: an auto-participative choreography with passers-by as audience -and- performers. With thanks to the AR+RFID-lab and <>TAG.

V2_ / Sharewear (Di Mainstone), V2_-lab / http://www.v2.nl / http://www.dimainstone.com
V2_ (Institute for unstable media, Rotterdam) will host their own greenhouse at TodaysArt 2008. There will be a performance called SHAREWEAR. SHAREWEAR (with artist Di Mainstone) consists of two dresses which are shown to the audience in a performance. Built-in electronic elements provide a surprising form of interaction between the garment and the wearer, and between the two dresses. By moving around and combining detachable elements, hidden light sources are controlled, creating extraordinary effects.

Dag In De Branding / Dick Raaijmakers: Grafische Methode Fiets / http://www.dagindebranding.nl / http://www.dickraaijmakers.nl
Dick Raaijmakers (Maastricht, The Netherlands, 1930) is generally considered as both the founding father and godfather of electronic music. He has however also created a most intriguing and inspiring body of work consisting of performances, visual art, music theatre and theoretical essays. De Grafische Methode Fiets (The Graphic Method Bicycle) is a performance that shows many of the characteristics of an installation because of the pure slowness of its actions. The actual subject and meaning of this performance is to dramatize a scientific experiment on behalf of art. This performance was initiated in collaboration with Dag In De Branding.

STEIM / Michel Waisvisz (In Memoriam): Shepherding on the Data Farm, performed by DJ Sniff /
http://www.steim.org / http://www.crackle.org
Michel Waisvisz (1949–2008) dedicated his life to the idea of “touching sound” through innovative instruments and energetic performances. He lead STEIM (Studio for Electro-Instrumental Music, Amsterdam) as Director for 27 years and his vision on independent live electronic music continues to inspire performing artists around the world. STEIM’s artistic and technical department supports an international community of performers and musicians and a growing group of visual artists. “Shepherding on the Data Farm” is one of Waisvisz’s few and last compositions made in late 2007. STEIM’s current Artistic Director Takuro Mizuta Lippit (DJ Sniff) will present this 13 minute tape piece at TodaysArt.