Report on Screendance:State of the Art 2 at ADF 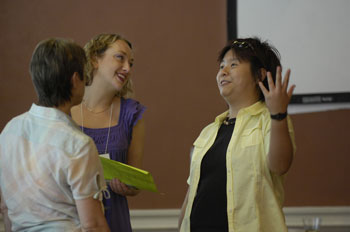 I'm finally home after several weeks on the road, crossing the country and then heading south for the second Screendance: State of the Art conference at the American Dance Festival. The topic for this year's conference was CURATING THE PRACTICE/CURATING AS PRACTICE. There were about 20 registered participants, coming from all over the US and Europe, and we were a good mix of artist/makers, teacher/scholars, and curators. While some of the old topics came up (like what is the definition of screendance?) the presence of the over-arching theme of curating helped guide many of the discussions into new territory, and keep us on topic.

Douglas Rosenberg, a filmmaker, scholar, and organizer of the conference started off the proceedings with a lecture about the history of curating as it arose out of the visual arts field and how this practice has gradually slipped by the wayside with the rise of the festival model in screendance. He spoke about the original premise of curating in the art world as a means of creating meaning by grouping different works of art together. This combination of art works creates a meta-narrative between the pieces and can serve to support a thesis about the art put forth by the curator. In this way curating can help shape new ideas in art.

I appreciated learning about how curating differs from "programming", which is generally how dance film festivals work. For a long time I've felt dissatisfied by the programs at festivals, particularly the shorts programs, because they can be such a grab bag of films that seem to have nothing to do with each other. Usually these programs are billed as the "best" new dance films of the year, with the dubious value judgment of "best" being the only unifying theme. With no other underlying meaning to connect the films together, I as a viewer often find myself feeling disappointed when the films fall short of my expectations of what "the best" dance film should be. I leave most screenings feeling like the vast majority of screendance is boring and uninspired, when in reality, I just didn't have enough context to view them under.

Helping to illustrate this difference between curating and programming, there were several curated screenings during the conference as well as screenings that were part of the "Dancing for the Camera" festival. One of these curated programs was put together by Claudia Kappenberg, an artist and scholar from the University of Brighton and was entitled "Paradoxical Bodies." In her program notes Kappenberg described "Paradoxical Bodies" as seeking "to address the peculiar premise of real bodies on screen, in itself a paradoxical proposition, which mixes and purposefully confounds mental states and actual physical existence." With this introduction we watched seven experimental films that were often oblique and seemed to float in the timeless space of ritual. The program included ELEMENT (1973) by Amy Greenfield, HWRGAN (BY THE LATE HOUR) (2006) by Simon Whitehead, K (1989) by Jayne Parker, THE NIGHTINGALE (2003) by Grace Ndiritu, SAND LITTLE SAND (2006) by Becky Edmunds, IT IS ACHING LIKE BIRDS by Lucy Baldwin, and SPRUE (2004) by The 5 Andrews. Most of these films have never been shown in dance film festivals before, either because they are not generally considered "dance", or they are not the typical show pieces that would past muster with a festival's judging panel. Despite their challenging and experimental nature, I was captivated by this program. After Kappenberg's introductory statements I was prepared to grapple with the paradoxes, ambivalence, and alternative notions of the body put forth in these films, and I was freed from having to compare them to my usual standards of what's "good" and "bad". Instead, I appreciated them for what they each said to me within the framework of the program's topic.

In contrast to Kappenberg's curated program, Sini Haapalinna, a freelance artist from Finland, presented a program of shorts from her first curation for the Finnish dance film festival "Beyond the Lens" which sought to show a snapshot of "the state of the art" of Finnish screendance. This was a good example of the usual festival model of programming, which culls work from an open call for entries, and then seeks to show the best ones of the group. While it was probably meaningful for Finnish audiences to see what work is being made in their own country, for an international group of screendance experts gathered in North Carolina, the program seemed jumbled and out of context. The works were all over the map in terms of style, production value, content, and intention. The result was a muddy program that had some nice isolated moments, but was somehow lesser than the sum of its parts. While Haapalinna probably didn't get the reaction she was hoping for from the conference attendants, it was actually really useful and informative for us to see this kind of program in light of the curation model Rosenberg had just presented. Finally we were able to critically respond to the festival model of programming, and articulate about why it isn't as effective as it could be at promoting and advancing screendance to the public.

In my next couple of posts, I'll talk about my presentation on "artist-driven" curating, and summarize some of the other discussions that went on at the conference including a theory for mapping screendance by Kappenberg, how a curator's role is always political by Gita Wigro, and a modified Venn diagram for curators of screendance proposed by Martha Curtis.

Comment by Anna Brady Nuse on July 24, 2008 at 9:14pm
I'm happy this has helped bridge the two worlds for you! It's interesting to me how the presenter and the artist are so symbiotic really. I think artists/makers feel like they are at the whims of curators, but really it is a two-way street. It is definitely in the interest of presenters/curators to help advance the field through their choices and the opportunities they give audiences to interact with the art and the artist. In another post I wrote about artists as curators, which I think helps facilitate this kind of progress very well.

Comment by CreationEditor on July 23, 2008 at 12:54pm
Thanks for this text!!! As a dance-film-maker it is always good to hear/see/read about the other side of presentation and curating dance work!
Sabine Klaus
www.creationeditor.co.uk