"for the time being" 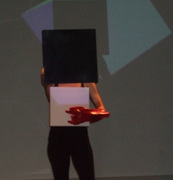 "for the time being" explores the sound of movement in a 30-minute premiere of a new stage work inspired by the Russian Futurist opera Victory over the Sun (1913) and its fantastical visual designs. Nearly a hundred years ago, the Futurists collaborated on an eccentric vision of a society to come, based on revolutionary fervor of the time. The DAP-Lab’s choreosonic performance, both comic and unsettling in places, is an intimate piece that looks at our current precarious existence in a world full of outworn clichés of revolutions.  Featuring four dancers, the work incorporates body-worn-technologies where the structure of the wearable has been developed alongside its interactive and sound generating potential for gestural performance. The artistic premise of the design is to make the activation and presence of sound very visual and sensual to both the performer and the viewer.

This performance is presented as part of Watermans' International Festival of Digital Art  (January - August 201).

The DAP-Lab’s cross-media work highlights convergences between physical movement choreography, visual expression in dance/film/fashion and wearable design, and real-time interactive data flow environments. Since founding DAP-Lab in 2004, Johannes Birringer and Michèle Danjoux have brought together artists and researchers from the UK, Japan, Brasil, U.S.A., and Europe, and developed prototypes of wearables/ garments which respond in distinct ways to body movement, camera capture, and sensory processing. The ensemble has created online performances, video exhibitions, the digital dance-work Suna no Onna (premiered at London’s Laban Centre in December 2007, recreated at Watermans in 2008).  Its choreographic installation, UKIYO (Moveable Worlds), produced in collaboration with artists from Japan, premiered at Sadler’s Wells, London after touring Eastern Europe (2010).

RSVP for "for the time being" to add comments!